After finally taking the field on Saturday, the Notre Dame Fighting Irish will be entering week two of the 2020 season with a win. The 27-13 victory over Duke took some time, but the hope is that the uncertainties going into that game have been addressed with the South Florida Bulls next on the docket.

The Bulls also won their opening game on Saturday, defeating The Citadel, 27-6, giving new head coach Jeff Scott his first win. Scott was hired after serving as Clemson’s OC, so he knows how to prepare for games against major schools but obviously won’t have a similar level of talent at his disposal.

Some of the key matchups to watch in this Saturday’s clash include:

A slow start for Book against Duke saw him struggle just to get a first down, but he eventually got things on track and now has a better sense of his available weapons. His one touchdown pass was countered by a bad throw that resulted in an interception, with another potential pick wiped out by penalty. The Bulls’ pass defense wasn’t really tested in their opener, so Book might be ready to open things up.

South Florida defenders were facing a Citadel offense with an outdated offense, which helps explain the mere six points they allowed. The Irish have enough talent at their disposal to offer a much stiffer challenge, but the Bulls managed to force three turnovers last week, so holding onto the ball should go a long way in helping Book and the offense thrive.

It took a half for the Irish defense to figure out Duke, but when they did, they took control of the game, with part of that early chaos related to the Blue Devils’ no-huddle offense. Giving up just a single touchdown was a good start for Notre Dame, while limiting the Duke running game to 2.4 yards per carry figures to bode well against the run-oriented Bulls..

McCloud might be one of multiple quarterbacks to line up behind center for the Bulls, though his range is questionable after completing 11-of-16 for 68 yards against Citadel. Alcorn State transfer Noah Johnson is more of a runner than a passer, while North Carolina transfer Cade Fortin’s strong arm is an unknown quantity after he sat out the opener for unknown reasons.

While linebacker Jeremiah Owusu-Koramoah paced the Irish defense against Duke with nine tackles, Foskey did a little bit of everything to aid in the Notre Dame victory. The sophomore’s two tackles were behind the line of scrimmage and included a sack, while he also blocked a pass and collected a pair of quarterback hurries, quickly making a name for himself.

Hopple presents a very large presence at 6-foot-7, 320 pounds and has plenty of experience opening holes for Bulls runners. His pass protection skills are effective, but whether or not the Virginia Tech transfer can handle the speed and quickness of Foskey in passing situations remains to be seen.

Hoping to build on a breakout performance, Williams showed off some game-breaking speed with a 75-yard run on a reception. That was in conjunction with his 112 yards and two touchdowns on the ground that dominated the Irish running game. The fact that veterans like Jafar Armstrong and Jahmir Smith, as well as up-and-coming Chris Tyree are also available may end up reducing Williams’ numbers. However, collectively that should end up being a positive for Notre Dame.

The 6-foot-1 Grier was the Bulls’ leading tackler in their opener, with 10 stops that included a sack and a forced fumble. He’s a player who tends to be around the ball on a frequent basis, which means his name may be heard often on Saturday. Emerged last year as someone who can stop a play before it truly gets started.

Against Duke, White had another quietly effective game, with five tackles and making the second-half adjustments to end any hopes of an upset by the Blue Devils. He’s likely to see much more action defending against the South Florida ground game than he did in the opener, with a shutdon effectively neutering the opponents’ offense.

The diminutive For stands just 5-foot-5, but has dangerous speed that needs to be held in check. Last season, off-the-field issues limited him to just four games, but he got off to a fast start in the Bulls’ opener with 71 yards on just nine carries. Two years ago, he broke off a 78-yard scoring dash against Connecticut and can also catch the ball out of the backfield.

Here Are The Keys To Unlocking Notre Dame's Passing Attack 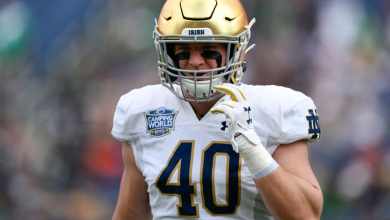 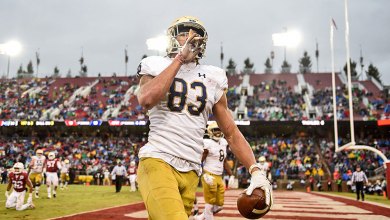 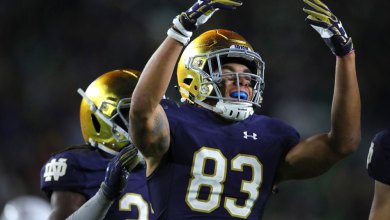 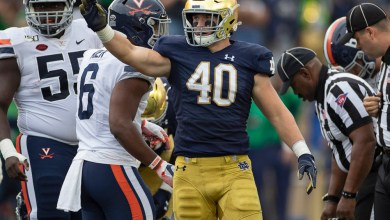