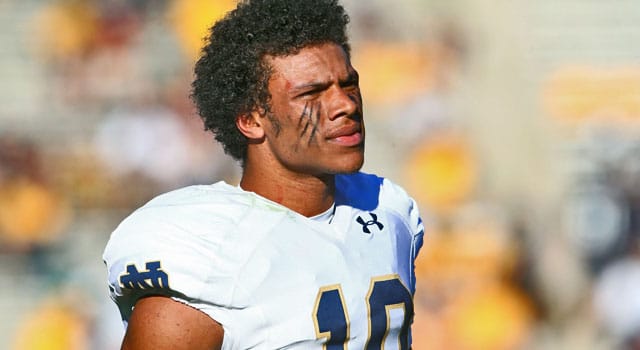 Notre Dame head coach Brian Kelly acted swiftly, fairly, and sternly on Sunday when he dismissed starting free safety Max Redfield from the team following the senior’s arrest early Saturday morning on possession of marijuana and an unlicensed fire arm.  Redfield, a one time 5-star recruit and starting member of the 10th ranked Fighting Irish, saw his Notre Dame career end as one of the most disappointing big time recruits to ever enroll at Notre Dame.

Max Redfield came to Notre Dame amid much fanfare in Notre Dame’s now notorious 2013 recruiting class.  Redfield joined Jaylon Smith and Eddie Vanderdoes to give Notre Dame a 5-star impact player at each level of the Irish defense.  Three and a half years later Vanderdoes never took a single snap in a single practice for Notre Dame and now Redfield has been dismissed following a career known more for troubles off the field than big plays on it.  Smith, on the other hand, went on to become an all-time great for the Irish and is chasing his NFL dreams with the Dallas Cowboys.

Off the Field Issues Were Not New For Max Redfield

Redfield never lived up this his 5-star billing on or off the field.  This wasn’t Redfield’s first, or even second, off the the field transgression and Kelly decided enough was enough even more the legal process took its course on the much aligned safety.

A big performance in the Pinstripe Bowl to end the 2013 season, however, had fans hopeful for him in 2014. As a sophomore in 2014 Redfield earned a starting role only to be benched later in the year for then true freshman Drue Tranquil.   Redfield ended another up and down year by being sent home from the Fiesta Bowl.

According to the Chicago Tribune’s David Haugh, Redfield was already on Kelly’s disciplinary radar this summer for another, unrelated incident as well.

And now comes his latest offense.  Just hours after being given the weekend off by Brian Kelly following a tough training camp, Redfield – a senior – was arrested with his four teammates – all of whom were sophomores or younger – after getting pulled over for allegedly speeding in a car with a busted tail light with marijuana and a loaded gun inside.

This Year Was Supposed to Be Different

It won’t be the year for any of that.

A Spring Football wake up call when early enrollee Devin Studstill passed the veteran safety on the depth chart was supposed to get Redfield’s attention.  It supposedly did.   According to every Notre Dame coach that spoke with the media this summer, Redfield was doing all of that.  Words like “maturity” were being thrown around and Brian Kelly was exciting Notre Dame fans by stating that Redfield was looking like the player everyone thought he would be coming out of high school.

Instead of seeing Redfield flash that 5-star talent by breaking up pass plays and blowing up runs in the backfield, Redfield is no longer a member of the Fighting Irish and his Notre Dame career will end with the label of bust.

In Redfield’s case his “bust” label is equal parts disappointing and maddening.  This isn’t a case of a player just being over rated by recruiting services or not being able to adjust to the size and speed of the college game.  This is a case of wasted opportunity and unfulfilled potential.

Redfield has all the talent in the world and flashed it at times throughout his career.  Consistency and blown assignments plagued him, however, over his first three seasons at Notre Dame.  A refocused Redfield on the field and in the film room this off-season had the senior in line for the breakthrough season we all have been waiting – a season that will never come for Redfield at Notre Dame.

Studstill, the early enrollee who momentarily passed him and played a role in awakening the 5-star talent within Redfield will now be asked to man the starting free safety role – one of the most complex and difficult positions to learn in Brain VanGorder’s scheme.

Redfield meanwhile now faces an uncertain future and football is the least of his concerns at the moment.  Whether or not Redfield has the opportunity at some point down the road to resume his career is currently secondary.  Getting his legal affairs and more importantly his life in order should be the top concern for the young man and those close to him.

Max Redfield has all of the measurables NFL scouts covet in safeties.  What he didn’t have was the film to back up those measureables.  Had he simply stayed on track and built on his strong training camp, Redfield could have played himself into NFL consideration with a strong season season.

At a place like Notre Dame, all you have to do is have one dominant season to grab the NFL’s attention.  Redfield had that opportunity this fall.  A big senior season and Redfield would have been preparing for the NFL Draft next winter.  Instead, Redfield now has to first sort through his legal problems before he can even think about football again.

The warning signs have been there for Redfield the last few seasons, but he kept hitting the snooze button.  Hopefully for Redfield’s future this serves as a wake up call – even if he is eventually acquitted of all charges or sees any of the charges dropped.

Max Redfield is still a young kid and will have a lot time and more opportunities to erase the bust label whether it be on the field or off.  He won’t, however, have that opportunity at Notre Dame.  Playing football at Notre Dame is a privilege and Redfield lost that privilege this weekend.

Sometimes it takes losing such a privilege to have ones eyes opened.  Hopefully for Max Redfield losing the privilege of playing for Notre Dame will be the wake up call he hasn’t been hearing the last three and a half years.