Max Redfield to Get a Look at Wide Receiver? 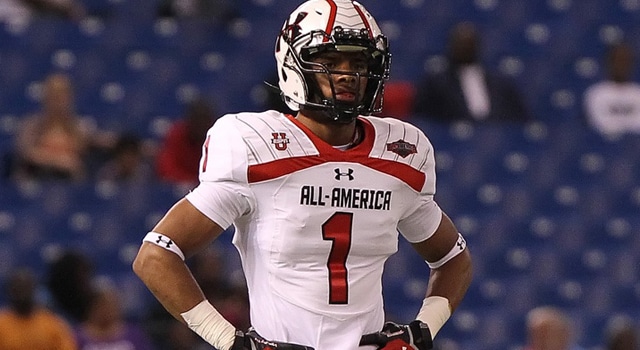 5-star safety Max Redfield could get a look on offense from the Notre Dame coaches this fall... that look might be short-lived however given the need for playmakers at the safety position for Notre Dame. (Photo: Kim Klement-USA TODAY Sports)

Notre Dame freshmen have reported to campus and have begun their college careers off the field.  One of the prized jewels of this year’s crop of freshman, 5-star safety Max Redfield, could be getting ready to begin his on field career on both side of the ball in a few weeks.

Redfield told the South Bend Tribune’s Eric Hansen that the Notre Dame coaching staff has let him know he will get a look on offense.

“The coaches talked to me about playing both ways a little bit,” Redfield said. “They said if I could get the defense down, they might throw me in at receiver every now and then. A wide range of other schools offered me a chance to play receiver and safety as well.

“Any way I can get on the field, I want to do it. And I feel like I could contribute on both sides of the ball for Notre Dame.”

Redfield is a very gifted athlete so the idea of him playing wide receiver is not far fetched.  Redfield did after all catch 32 passes for 528 yards with 5 touchdowns as a junior in 2011 and added another 45 for 757 yards with 6 touchdowns this past fall.

One possible problem with Redfield playing offense, however, is his jersey number.  Redfield will be wearing #10 for Notre Dame.  That won’t be a problem when Redfield is on the defensive side of the ball, but if he were to see the field as a wide receiver as well, one of Notre Dame’s most dangerous weapons at receiver, Davaris Daniels, would not be able to be on the field at the same time.

Those instance, however, figure to be few and far between. If ever again.

Daniels and Redfield could be on the field independently of each other though so it is possible that the coaches design some sore of package for Redfield that would not include Daniels to be on the field, but as one of Notre Dame’s top two receivers – if not their #1 wide receiver, Daniels does not figure to be off the field very often in 2013.

Of course, Redfield seeing the field as a wide receiver in 2013 would also require that he picks up the defense fast enough for the coaches to throw more on his plate this fall.  Given Notre Dame’s lack of depth and playmaking ability at safety outside of Matthias Farley, it’s hard to see the coaches wanting Redfield to do much else other than soak in every snap he can at safety, at least initially anyway.

Sophomore Elijah Shumate figures to have a prominent role in the Notre Dame defense in 2013 after a big spring, but if Redfield were to emerge as a viable starting safety opposite Matthias Farley, the staff could decide that the best combination of starting defensive backs includes Redfield at safety and Shumate as the nickel back given how frequently the Irish find themselves in a nickel defense.

Notre Dame will have Shumate battling for that starting position with Redfield, Austin Collinsworth, and Nicky Barati this fall, but Redfield figures have the most long term potential for the Irish at the position.

If there is anything that we’ve learned from Brian Kelly, however, is that he will move players to new positions if he thinks they can make an impact elsewhere. Kelly moved Keivarae Russell to the defensive side of the ball last year even though he was seen as a potential game breaking wide receiver and the move has paid dividends for the Notre Dame defense ever since.

All that said, any looks that Redfield gets on offense will likely come down the road with the Irish set with TJ Jones and Davaris Daniels as their top two wide receivers with a host of other receivers in the mix for playing such as Amir Carlisle, CJ Prosise, Chris Brown, and even fellow freshmen and early enrollees James Onwaulu and Corey Robinson.

Regardless of where Redfield plays, it is safe to assume that the California native will make an early impact for Notre Dame in some capacity.  Notre Dame hasn’t landed a defensive back as highly regarded as Redfield since Gerome Sapp over a decade ago and nothing we’ve heard since he signed his letter of intent in February has suggested that