Max Redfield’s Time Could be Now 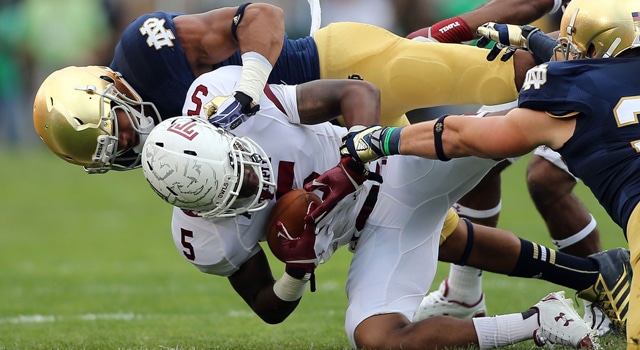 Notre Dame signed four 5-star players last February.  One’s been a starter since day one, one never made it to campus, one had knee surgery and will red-shirt, and one has played sparingly.   Max Redfield is the one whose played sparingly, but that could very well change in a hurry this weekend.

On Friday it was reported that both Eliar Hardy and Elijah Shumate will not travel with the team to take on Stanford tonight putting a huge dent in Notre Dame’s depth at safety this weekend.

Enter Max Redfield. The high school standout came to Notre Dame with an elite pedigree, but to this point his main impact has been on special teams and mop up duty while other freshman such as Corey Robinson, Jaylon Smith, and Tarean Folston have played much larger roles.  The reason for that is that Redfield’s responsibilities as a safety are much greater than some of his freshman classmates.

“Tarean (Folston) has had to wait for his chance and he’s getting more of it as the season progresses,” Brian Kelly said earlier this week.  “Max has ten times as much on his plate at that position than Tarean Folston, ten times, in terms of coverage checks and formation adjustments and communication,” he added.

The reason Redfield has so much more on his plate is because of all of the responsibility that falls onto the safeties in Notre Dame’s scheme.   “If we were a close‑the‑middle‑of‑the‑field, cover‑one team, he would probably have been standing back there in week one if that’s what we did.  But that’s not our system.  We are a two‑deep team, and there’s a lot going on,” Kelly said.

Despite not playing many meaningful minutes thus far though, Kelly is confident that Redfield has a bright future for Notre Dame.  “He’s going to be a dynamite player for us.  But there’s so much knowledge in our system and the way we play, because we are a two‑deep team,” Kelly said on Tuesday.

Kelly also mentioned on Tuesday that Redfield was making progress and that the staff was starting to see him play the way he is capable of.  “He’s learned a lot and he’s grown a lot, and he’s at a position now where he’s starting to feel pretty comfortable,” Kelly said.   “We’re seeing him kind of fire his guns like we know he can.  And that’s only going to get better for him.  He’s got a bright future,” he later added.

Kelly said all of this on Tuesday before he knew that the Irish would be without Shumate and Hardy.  Against a physical Stanford offense the Irish are going to need all of the bodies they have at safety, especially given the troubles Matthias Farley has had in the tackling department this year.  With Shumate and Hardy out, that leaves just John Turner and Redfield as the reserve safeties for Notre Dame behind Austin Collinsworth and Matthias Farley.

Could this weekend be Redfield’s coming out party just as the BYU game was for Jarron Jones last weekend?  Stanford’s offensive scheme is not as complex as some others the Irish have faced since they are more of a physical, hit you in the mouth type offense which could allow for Redfield to have some success given the fact that he is likely in line for much more playing time than originally thought.

Regardless of whether or not Redfield plays well or even plays a lot against Stanford, it’s seems clear that he has a bright future for the Irish.  If Notre Dame is going to upset Stanford tonight, that future might start to brighten up sooner rather than later.