Michigan: The 3 Keys to Victory 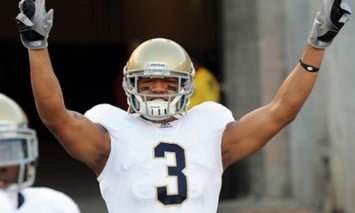 Michael Floyd and the Irish hope to rebound in week against Michigan in the Big House.

After a disappointing loss to USF, Notre Dame coaches, players and fans turn their attention towards rival Michigan, and the first-ever night game in Big House history. Notre Dame must continue to build and improve upon its promising second-half performance in order to be victorious.

In order to beat Michigan, Notre Dame cannot afford to dig themselves into a hole by committing mindless errors. Red Zone turnovers must be eliminated, especially ones like Floyd’s hold or Ruffer’s missed field goal. Fortunately, the players who committed these errors are experienced – seniors, 5th year seniors and captains. Harrison Smith, Ethan Johnson, David Ruffer and Floyd have shown throughout their careers that they are indeed smart, disciplined team leaders, so hopefully these errors were a first-game fluke.

Despite Floyd’s monster 12 catch, 154 yards, 2 TD game, the receiving corps could not have looked much worse. Theo Riddick looked lost, dropping multiple catches and fumbling punt returns. After a solid freshman campaign, TJ Jones also struggled. Despite decent numbers (9.7 yd/catch), he dropped a catchable touchdown throw, and caused an interception by not looking for Rees’s throw. If these players continue to struggle, look for Roby Toma to take over the slot, and freshmen Davarias Daniels to get his shot at playing time. A bright spot among the receivers was TE Tyler Eifert, who after a 1 catch for 4 yd first half, emerged with the substitution of Rees, and ended up with 93 yards receiving, including the critical 3 and 10 catch. Michigan’s secondary proved last year that it might be one of the nations worst, so in order for Notre Dame to win, receivers must step up and expose this weakness.

No Irish fan needs a reminder of what Robinson did to Notre Dame last year, obliterating the defense by air and by ground. Luckily for Notre Dame, with the arrival of new head coach Brady Hoke, a more traditional offense also arrived. Last week against Western Michigan, Robinson only had 98 yards passing and 46 yards running in three quarters. These measly stats show that Robinson has yet to fully adjust to the new offense, and must adjust fast, because Notre Dame’s defense is better than Western Michigan’s. Notre Dame showed last year verse Army, and against USF, that they have improved in stopping option offenses and running quarterbacks. Look for Dan Fox to make an impact in this game because of his speed, a trait that put him ahead of Carlos Calabrese on the depth chart.

I look for Notre Dame to rebound, and not beat themselves the way they did against USF. Also, Tommy Rees has a unique habit of excelling in the most prestigious of college football stadiums, so I look to him to lead the Irish to victory in the first-ever night game in The Big House.