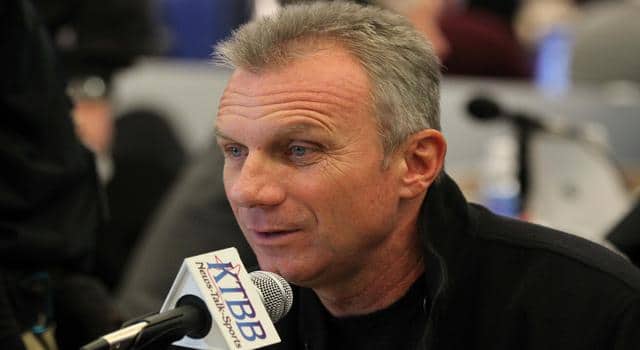 Since Brian Kelly’s arrival at Notre Dame nearly three years ago, there have been countless momentum shifts. To throw out a cliché, whenever the ND program seems to shuffle in the right direction they’re immediately thrown back yards at a time, be it with injuries, suspensions or PR fiascos. The Irish were hit with a twofer yet again last week on the heels of a road trip to Dublin, just as positive energy began to spread regarding Notre Dame’s matchup against Navy.

Former All-American and career rushing leader – until Autry Denson broke his record in 1998 – Allen Pinkett started the rough patch during a radio interview on 670 AM in Chicago. Pinkett’s advice on how Notre Dame could once again reach the heights of the college football world surprised many when he suggested the Irish begin targeting “criminals”.

“I don’t want any mass murders or rapists,” Pinkett said, attempting to offer context. “I want guys that maybe get caught drinking that are underage, or guys that maybe got arrested because they got in a fight at a bar, or guys that are willing to cuss in public and don’t mind the repercussions of it. That’s the type of criminal I’m talking about.”

Naturally, Pinkett’s comments did not sit well with the University of Notre Dame, with athletic director Jack Swarbrick issuing a lightning-quick statement condemning Pinkett’s remarks. “Allen Pinkett’s suggestion that Notre Dame needs more ‘bad guys’ on its football team is nonsense. Of course, Allen does not speak for the University, but we could not disagree more with this observation.” Though Pinkett, a broadcaster of Notre Dame football games, has since issued an apology, it did not stop him from being suspended from coverage of three games.

ND’s public relations issues ending there would be far too simple. Former Irish legend Joe Montana decided throwing another stick into the fire wasn’t subtle enough, instead opting to bring his own flamethrower for a little pizzazz. In an interview with ESPN, Montana didn’t mince words when describing how he feels about Notre Dame, Brian Kelly and the new Irish starting quarterback, Everett Golson.

“Kelly can’t figure out what he wants,” Montana said. “Every one of his QBs that he has, he claims is his next star, but he doesn’t last long with him. (Golson) is probably the least talented thrower that they have, so maybe they’re looking to run the ball with him.”

When Brian Kelly was pressed about a response to Montana’s criticisms, Kelly took the high road, saying, “Well, Joe Montana is an icon. He’s entitled to his opinion about our football team. I think that’s all I’d say about that.”

To date, much has been made about Allen Pinkett’s comments, and with good reason. However, Montana’s remarks have mostly fizzled out, being overshadowed by Pinkett and the start of the college football season. It’s a shame, too, because Montana’s comment is far worse than Pinkett’s, and Montana should receive pressure to apologize.

Pinkett deserves the three-game suspension he received, especially when he was given an opportunity to recant his statements by the Chicago radio hosts interviewing him, an opportunity he refused. But if you look closer at his comments, you see someone struggling to adequately describe their true feelings (which is definitely cause for concern for someone who makes their living describing plays unfolding on a football field).

Pinkett isn’t looking for criminals to come to Notre Dame, though that’s the word he unwisely decided to use. Pinkett was attempting to illustrate his desire for Notre Dame to recruit more players with an edge – players who have a naturally nasty disposition and temperament. A kind of player that takes a startlingly intense pleasure toward hitting other players with all his might. The kind of player who, if he didn’t have the release of football, might struggle channeling his aggression. As I have told my girlfriend, a massive Stephen King fan, humanity should be eternally grateful King chose to wield a pen and not another pointy instrument. With the kinds of demons he has floating around his head, it’s best for us all they’re expressed on paper and nowhere else. Such is the type of edge Pinkett was attempting to describe, though he ultimately failed.

There are no mixed messages regarding Joe Montana’s comments, though only one component of his statement deserves criticism. Montana has every right to dislike Brian Kelly or speak out publicly about things he may not like or embrace about the University of Notre Dame. This wouldn’t be the first time a head coach at Notre Dame received flak from former players, with Charlie Weis even having a billboard taken out against him several years ago. The problem with Montana stems from his comment about Everett Golson.

To say that Golson is “probably the least talented thrower they [Notre Dame] have” is below the belt, and is a comment aimed directly, to quote Kenny Loggins, at the danger zone. When I read Montana’s comment involving Golson, I had my own little Mike Gundy flashback. It’s one thing to have a problem with Notre Dame or Brian Kelly, but it’s quite another to fire a cheap shot across the bow of a redshirt freshman who had absolutely nothing to do with whatever hostility exists between Kelly and Montana. Not only are Montana’s comments unacceptable on their face, but issue should be taken with their accuracy as well. There is no evidence indicating Montana has attended even one Notre Dame football practice since Golson’s arrival on campus in January of 2011, making it extremely doubtful Montana had ever seen Golson throw prior to his statement. And even if Montana had witnessed Golson totin’ the pigskin, would his brief glimpse of Golson be enough to offer a blanket statement that Golson is the “least talented thrower” on the team? As a former quarterback, Montana knew better. The problem is he didn’t care.

Allen Pinkett was guilty of poor word choice and has since apologized for his comments. He deserves his three-game suspension, and hopefully time will allow Irish fans and administrators to forgive. Joe Montana, on the other hand, needs to apologize for his comment regarding Golson, and shame on the national media for not pressuring him into doing so.