NCAA’s Targeting Rule in the Crosshairs 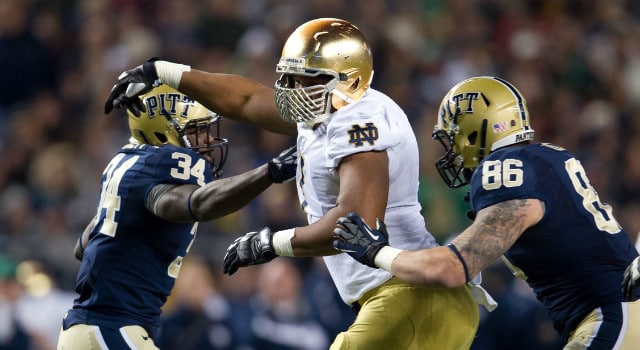 Notre Dame would love to land more impact recruits from the South like they did three years ago with Stephon Tuitt. (Photo: Matt Cashore-USA TODAY Sports)

Notre Dame defensive end Stephon Tuitt adamantly pleaded his case with officials in Notre Dame’s game against Pittsburgh as head coach Brian Kelly aided his defense with words of anger from the sideline.  The objections were dismissed, and the Fighting Irish star joined a growing statistic of over 50 players ejected due to the NCAA’s new targeting rule.

The grumbling has seen a steady rise throughout the 2013 season with programs from every corner of America taking aim.  Ohio State head coach Urban Meyer voiced his opposition to the rule after Buckeye cornerback Bradley Roby was disqualified for a targeting call against Iowa.

“We at Ohio State are very concerned about player safety,” Meyer said.  “However, [Roby’s ejection] was a game-changer.  To take one of your better players out of the game, that impacted the game.”

In an unexpected twist illustrating how powerful criticism of the new rule has become, the Southeastern Conference put aside its contentious past with Meyer and joined his side after a rash of ejections swept across the SEC’s borders.  Two targeting calls were enforced within Georgia’s match against Vanderbilt, and one a piece in South Carolina’s matchup against Tennessee and Florida’s contest against Missouri.  Georgia was particularly incensed after a targeting foul was called against Bulldog linebacker Ramik Wilson.  Though Wilson’s disqualification was overturned, the 15-yard penalty still stood, highlighting a peculiar component of the targeting rule: a player can be found innocent of targeting upon instant replay review yet the 15-yard penalty remains.  The extra yardage breathed new life into a Vanderbilt Commodore team that trailed 27-21 at the time of the occurence.  Vanderbilt would ultimately come from behind and upset the Georgia Bulldogs, 31-27.

The ascending tidal wave of discontent is on the verge of crescendo with media personalities supplementing head coaches and football conferences in their quest to bring about the rule’s downfall.  College football analyst Bill King personally lights every villager’s mob torch whenever the targeting rule is mentioned by callers on his weekday program, On Campus.  Even Mike Pereira, former Vice President of Officiating for the NFL, has lanced the rule, indignantly writing a column that openly questioned the relevancy of the NCAA.

With such acrimonious contempt stemming from experts of the game, it isn’t hard to imagine how irked fans have become.  What is it, exactly, about the rule that has led to such hostility in an era where player safety is paramount?

No player shall target and initiate contact against an opponent with the crown (top) of his helmet.  When in question, it’s a foul.

The NCAA clarifies its meaning by defining what it makes to “target”:

To take aim at an opponent for purposes of attacking with an apparent intent that goes beyond making a legal tackle or a legal block or playing the ball.

Stephon Tuitt’s hit – and subsequent ejection – on Pittsburgh quarterback Tom Savage brought to the surface every faulty element within the well-intentioned rule.  Early in the second quarter Savage scrambled out of the pocket and toward the sideline, and as he did so was met with a helmet-to-helmet collision.  Tuitt committed to the tackle, and Savage dropped his shoulder to rightly protect himself, which is when the point of contention surfaced.

The 6’6” Tuitt began the process of the tackle with his helmet at chest height, and it was only when the 6’5” Tom Savage lowered his shoulder to mitigate the ensuing blow that their helmets reached the same level and made contact.  The helmet contact was what drew the yellow flag – the question then became whether or not Tuitt targeted the Panthers quarterback.

The test for whether or not a player engaged in targeting consists of actions that denote risk, with one indication of “less risk” being when the contact is “incidental” and is more consistent with “players changing position during the course of the play.”  Officials presiding over the incident had to ask themselves one simple question: did Tuitt intend to go beyond the legality of a tackle or was the collision due to Savage lowering his shoulder?  Thanks to the rule’s burden of proof, which assumes guilt unless innocence is ultimately proven, the answer was an easy one.

When in doubt, throw ‘em out.

In a smidgen of unfortunate irony, at the end of the third quarter Pittsburgh defensive back Trenton Coles suffered a serious head injury when colliding with teammate Jason Hendricks while attempting to break up a pass intended for Notre Dame wide receiver William Fuller.  Given the current state of the NCAA’s targeting rule, an argument can be made the only thing that spared Hendricks from disqualification was the fact his unintended victim shared the same logo on his helmet.

The shortcomings of the NCAA’s targeting rule and its repeated public relations defeats come on the heels of an ESPN Outside the Lines report documenting former Pittsburgh great Tony Dorsett’s diagnosis with a degenerative brain disease, the same disease former Notre Dame great Dave Duerson suffered from prior to his death in 2011.

What can be done to solve the flawed system remains elusive, but the one thing that cannot be denied is that the NCAA is falling behind in a health battle it can ill-afford to lose.