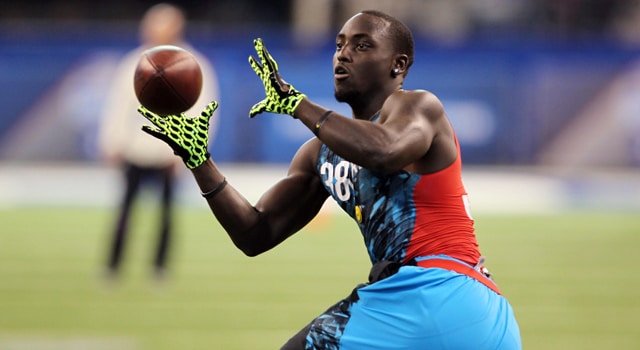 Former Notre Dame running back Cierre Wood didn’t wow scouts at the NFL Combine on Sunday with an eye popping 40 or any other individual drill, but he did turn in an all around solid performance that should help his draft stock.  His backfield teammate Theo Riddick, however, did not help his draft stock and actually ended up getting hurt.

Wood ran a respectable 4.56 40 yard dash which was good enough for 14th best among the 33 running backs that participated in the drill.  Wood, however, was one of the top performers in the broad jump (124 inches) and the vertical jump (37.5 inches).  Both of those numbers placed Wood 4th among all participants at running back.

With his performance, Wood likely solidified himself as a mid round selection.  Where he could really have helped himself even more was in the interviews, but unfortunately no one outside of Wood and the teams he talked to know if those helped or hurt his stock and the questions teams likely had around his 2-game suspension and why he lost the starting job to Theo Riddick in 2012 after a 1,000 yard season in 2011.

Speaking of Riddick, the New Jersey native had a disappointing weekend in Indianapolis.  Notre Dame’s leading rusher in 2012 posted just a 4.68 time in the 40 and later revealed that he pulled his hamstring on Twitter.

While Riddick’s 4.68 wasn’t the worst among the running backs – Stanford’s Stefan Taylor ran a 4.76 and Pitt’s Ray Graham ran a pedestrian 4.8 – Riddick needed to put up some good numbers in the speed and agility drills since he came into the weekend as a back without much top end speed.  He’ll have a chance to impress scouts one more time at Notre Dame’s Pro Day on March 26 which should be well attended given the interest in Manti Te’o and Tyler Eifert specifically among NFL teams.

Speaking of Eifert, in case you missed it, Notre Dame’s all-time leader in tight end receptions turned some heads in Indy this weekend.

If Riddick is able to put on a strong performance at Notre Dame’s pro day and flash the all around versatility that we all saw throughout his career, his place as a late round selection at worst should still be in tact.  If Riddick turns in 40 times in that range again in South Bend though, he could find himself a late round pick at best and more likely an undrafted free agent.

For Wood, he will get another chance at Notre Dame’s pro day to build on the momentum from his performance in Indianapolis this week and given his big play ability could end up sneaking up some draft boards.  All it takes is one team to fall in love with a prospect and if Wood was as charismatic in his interviews as he has been with the media over the last three years, it wouldn’t surprise me at all if he snuck into the 3rd round.

Linebackers and defensive linemen take the stage tomorrow.  Manti Te’o handled himself well in media sessions and interviews this weekend, but will now need to follow that up with good performances in drills.  If Te’o is able to run a good 40 time, he will ease some on the field concerns teams have after doing a good job easing the off the field ones already.