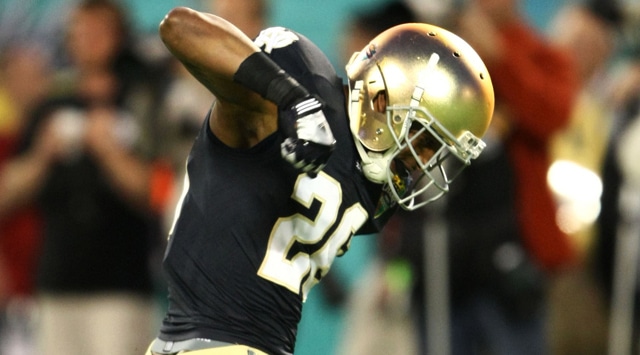 Notre Dame had two former players selected within the first 38 picks of the 2013 NFL Draft this weekend but didn’t have a 3rd player selected until the 174th pick when the Cleveland Browns selected rehabbing Jamoris Slaughter in the 6th round.

Slaughter, one of the most versatile athletes to play for Notre Dame in recent years had applied for a 6th year of eligibility due to the various injuries he suffered throughout his career but was denied an additional year by the NCAA earlier this year.

Those injuries include a torn Achilles he suffered in week two against Michigan State that cost the safety the remained of his 5th season at Notre Dame that Slaughter is still currently rehabbing.  That injury left doubt as to whether Slaughter would get drafted at all, but the Browns medical staff was confident enough in his medical status that they did not want to risk Slaughter becoming an undrafted free agent.

When healthy, Slaughter is an extremely versatile athlete that can help a NFL team in a number of ways.  While at Notre Dame Slaughter played cornerback, safety, and even a little outside linebacker like he did in the 2011 Champs Sports Bowl when the Georgia native had the most impressive performance of his career.  Unfortunately for Notre Dame Slaughter was not able to capitalize on that breakout performance against Florida State when his season ended prematurely in Spartan Stadium against Michigan State.

Browns GM Joe Banner told the media that they were very happy to get a player like Slaughter as late as they did.  “We feel like we got a player who has a chance to be a contributor much more than you normally would get in the sixth round,” said Banner before adding that Cleveland’s medical staff felt comfortable with where Slaughter is in his rehab.

Slaughter told the media on Saturday that he was a little surprised to be drafted given his injury status, but that right now he felt was was at about 90% and would be ready for training camp.

Landing in Cleveland is a great spot for Slaughter. The Browns have very little depth at the safety position giving Slaughter a great opportunity to not just make the Browns roster, but see meaningful playing time if he is fully recovered from his injury in time for camp and the start of the season.

Slaughter was Notre Dame’s third player selected in the draft after Tyler Eifert was selected 21st overall on Thursday night by the Cincinnati Bengals and Manti Te’o going #38 overall to the San Diego Chargers.  With Slaughter in Cleveland and Eifert in Cincinnati, it is very possible that the two former teammates could find themselves lined up against each other this fall now that they are divisional rivals.