Floyd Impresses in the 40 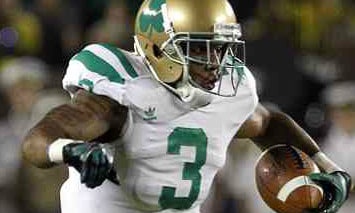 The off the field questions for Michael Floyd will linger until Draft Day after his alcohol related incidents at Notre Dame, but the only on the field issue surrounding Floyd was emphatically cleared on Sunday when the Irish record breaker clocked in at 4.42 and 4.44 in the 40 yard dash at the NFL Combine.

Heading into this weekend’s Combine in indianapolis, the only on field issue scouts could have had with Floyd was his speed.  While Floyd made a number of big plays for the Irish over the last four years, his speed was not on display much the last few seasons so questions lingered about Floyd’s top end speed.  After recording two 40 yard dashes in the 4.4 range though, those questions no longer remain.

With his performance in the 40, Floyd has almost ensured that he is now a first round lock in April’s draft after slipping on a few draft rankings over the last few weeks.  Floyd’s body of work, measureables, and speed will likely trump any off the field questions teams in the pass happy NFL still have regarding Floyd.

The only reason the speed questions even remained for Floyd was because he simply didn’t have a quarterback capable of getting him the ball down field on a consistent basis.  When Jimmy Clausen was still under center for the Irish, Floyd routinely made big plays down the field where his speed was on full display.  Remember Floyd’s freshman season when he flew by All Pac-10 sprinter Wopamo Osaisai for a 48 yard touchdown from Jimmy Clausen? Let me remind you.

There were no questions about Floyd’s speed that day and there shouldn’t be any more moving forward.

With his status as a first round pick pretty much locked up, it’s safe to say that Floyd’s decision to come back to Notre Dame for his senior season – even if it did involve a detour in the off-season – turned out to be a smart decision.  Last year at this time Floyd was projected to be a second round pick and even with the new rookie wage scale, Floyd will be playing under a much more lucrative first contract.

On a personal note, I hope the Eagles Andy Reid and Howey Roseman were watching Floyd run on Sunday as I’d love for the Eagles to find a way to get some compensation for DeSean Jackson and then use their 15th overall pick to select Floyd.  The Eagles have been in need of a red-zone threat for years and who could fill that role better than the all-time receiving touchdown leader in Notre Dame history?