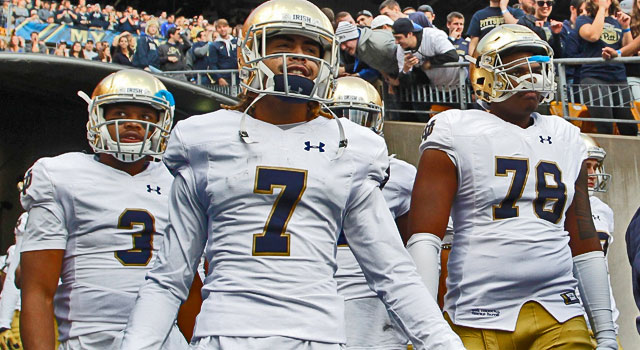 And another domino in the Notre Dame off-season has fallen.  Star wide receiver Will Fuller has announced that he intends on forgoing his senior season and has declare himself eligible for the 2016 NFL Draft – the second player (CJ Prosise being the other) in consecutive days to declare they would be leaving Notre Dame for the NFL with eligibility remaining.

Back in November Fuller announced he would definitely be returning to Notre Dame for a senior season, but in the end, the allure of fulfilling his lifelong dream of playing in the NFL was too much to pass up.

Fuller currently projects as a late 1st round/early second round pick and there was some debate as to how much he could improve his draft stock by returning.  Wide receivers who get drafted in the top 10-15 picks tend to be much larger than Fuller – players like Julio Jones and AJ Green.  Coming back for his senior season would not have changed Fuller’s size so there is a good chance that his stock now is as high as it would have been even if he returned for his senior season and rewrote the Notre Dame record book.

Fuller posted back to back 1,000+ yard seasons for Notre Dame after racking up 1,258 yards and 14 touchdowns on 62 receptions this season.  He leaves Notre Dame with 30 career receiving touchdowns trailing on Michael Floyd in the Notre Dame record books.

With Fuller now headed to the NFL, Notre Dame faces the daunting task of replacing all three of its starting wide receivers in 2016 with Chris Brown and slot receiver Amir Carlisle out of eligibility leaving the Irish only with Corey Robinson and Torii Hunter as experienced receivers heading into 2016.

Notre Dame could move Torii Hunter to the outside or keep him in the slot and flank him with a combination of Robinson and rising sophomore Equanimeous St Brown or his classmate Miles Boykin.  Rising senior Corey Holmes will be in the mix for a starting position as well.  The x-factor here could be slot receiver CJ Sanders.  If the speedy rising sophomore is ready for an extended role in the slot, Hunter could move to the outside and attempt to fill the big play threat that Fuller posed on oppsong defenses the last two seasons.

Notre Dame also remains in the mix for elite high school senior Demetris Robertson – a 5-star recruit who has the type of ability to step in a start from day one for almost any program in the country.  The Irish might be considered a long shot to land Robertson, but given the abundance of starting positions open and the success of the Notre Dame offense in 2016, Notre Dame could suddenly be looking a lot more enticing to Robertson.  Both points are sure to be a focus of Notre Dame’s sales pitch to the Georgia native over the final month of recruiting as well.

With Fuller’s departure, Notre Dame has now lost two players with eligibility remaining since the season ended.  Yesterday CJ Prosise announced his intentions to forgo a potential 5th year in 2016 and enter the 2016 NFL Draft.  Technically Ronnie Stanley has a 5th year available as well, but we all knew before the season that Stanley would be headed into the 2016 Draft.

Two additional draft eligible players with NCAA eligibility remaining have yet to declare their intentions. Jaylon Smith looked like a lock to declare before the Fiesta Bowl, but now his injury has clouded his immediate NFL future.  Keivarae Russell meanwhile could potentially be back for a 5th year depending on if he wants to come back and if the NCAA rules him eligible given his “redshirt” season in 2014 came due to academic suspension.