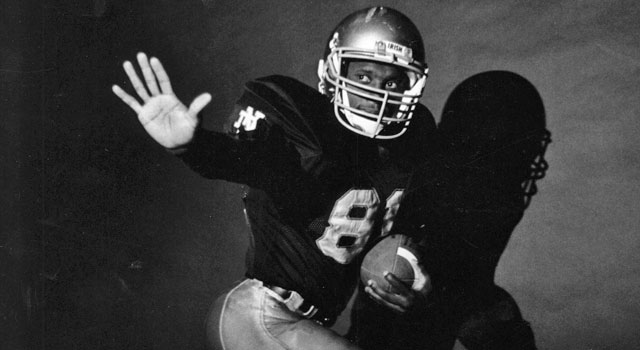 The preliminary ballot for the 2015 NFL Hall of Fame was announced on earlier this week and five Notre Dame greats are on the among the 100+ candidates vying for the maximum of eight enshrinees.  Two Irish legends, however, stand out from the group and are long over due for a trip to Canton next summer – Tim Brown and Jerome Bettis.

It’s head scratching to me that an all-time great like Tim Brown hasn’t already made the trip to Canton.  Competition is tough every year for those precious eight spots, but the man’s resume screams that of being a Hall of Famer.  During his illustrious 16 year career Brown was one of the elite wide receivers in the NFL at a time when passing wasn’t quite as prolific as it is these days.

While playing most of his career with an unstable quarterback situation in Los Angeles/Oakland, Brown tore it up on the field.  Here are just a few of his accomplishments that should have made his enshrinement a no-brainer by now:

Despite all of those accolades, Brown hasn’t been named to the Pro Football Hall of Fame yet.  He has been a finalist in each of the last five years, but to date he hasn’t gotten that yellow jacket.   During that time three other wide receivers have been enshrined – Jerry Rice, Cris Carter, and Andre Reed.  A solid case can be made that Brown was at least as deserving as all but Rice of those three.

This year Brown will have some competition on his hand at wide receiver again. Isaac Bruce and Tory Holt are both on the ballot for the first time and Marvin Harrison, who finished in the top 10 last year without being inducted, is also there.   Brown and Harrison have similar resumes from a receiver standpoint, but Brown’s work as a return man should be enough to push him past Harrison.  It wasn’t last year, unfortunately, but hopefully this year it is.  Brown also had to deal with the revolving door at quarterback for the Raiders while Harrison spent his career catching passes from Peyton Manning.

Also hopefully working in Brown’s favor is his exemplary off the field resume.  Given all of the legal troubles NFL players are facing this year, it’s possible that Brown’s pristine off the field record will work in his favor.

Jerome Bettis is Hall of Fame worthy too

Like Tim Brown, Jerome Bettis has been a multiple time Hall of Fame finalist, but has yet to make the trip to Canton.  Bettis has one less year of waiting for the call to the Hall than Brown, however, being a finalist every year since 2011.   During that time, only two running backs – Marshall Faulk and Curtis Martin – have been inducted.

Also like Brown, Bettis has a resume that is deserving of enshrinement.

The good news for Bettis this year is that he was in the final 10 last year and does not face competition from any real elite running backs who have a stronger resume.  Edgerrin James, Eddie George, and Tiki Barber look to be stiffest competition.  There are some other solid backs like Shaun Alexander, Terrell Davis, and Stephen Davis on the ballot as well, but Bettis has to really like his chances among this group.  Former Notre Dame great Ricky Watters is also on the ballot this year, but the 5-time Pro Bowler has never been a finalist in past years.

Aside from Brown, Bettis, and Watters, two other Notre Dame greats – Mark Bavaro and Bryant Young – are on the ballot too.  Bavaro, however has been out of football for 20 years and has never been a finalist in the past.  Young, a member of the 1990’s All-Decade team has only been out of football for seven years and will likely have to wait a few more years until he gets more serious consideration.

On top of the competition at their respective positions, Notre Dame’s candidates will face competition among the other positions as well since each year’s class is limited to eight total members at max.  Junior Seau, Kurt Warner, Orlando Pace, Will Shields, and Kevin Greene are all either first year candidates with strong cases or were among the final 10 last year.

Considering Bettis was among the final 10 last year and there isn’t a lock for enshrinement at the running back position, this year very well could be the year for one of Notre Dame’s all time great running backs.  Brown might have a tougher time this year since Harrison progressed farther than him last year and with eight spots it’s tough for two players at the same position to be enshrined in the same year.  As we’ve seen though, Brown has several advantages that should give him an edge.  Whether or not they do remain to be seen.

As far as the process, the 100+ player list will be cut to 25 by late November by the Hall of Fame committee.  From there, 15 finalists will be announced in January.  Voting will take place the day before the Super Bowl with the results being announced later that night.  Hopefully when those results are announced two long deserving Notre Dame greats will have an invitation to Canton.