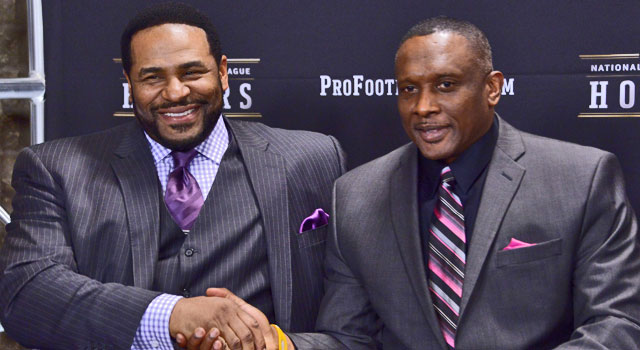 Back in September I wrote that it has been long over due that Notre Dame legends Tim Brown and Jerome Bettis be elected to the Pro Football Hall of Fame.  On Saturday night, both Irish greats had their long wait for election to the HOF end when the pair was officially named as members of the 2015 Hall of Fame Class.

Brown and Bettis join a 2015 class that as includes the late Junior Seau, Charles Haley, Will Shields, and Mike Tinglehoff and executives Ron Wolf and Bill Polian (father of former Notre Dame assistant coach Brian Polian). Brown and Bettis  had been finalists before but were edged out in previous years.  That was not the case this year.

For Brown, the life-long Raider saw fellow wide receivers such as Andre Reed, Michael Irvin, and Cris Carter gain admittance to the Hall in recent years while Bettis watched former running backs Marshall Faulk and Curtis Martin have their names called before his.  Fortunately for both, however, their waits over and both will be enshrined into the Hall of Fame this summer.

Bettis took to Twitter after being included in the 2015 class.

So happy to be amongst the games greatest players!! My Family and I are truly honored and blessed!

Both Brown and Bettis are no-brainer hall of famers after the impressive NFL careers they both posted – Brown with the Raiders and Bettis with the Rams and Steelers and as I said in September, their election was no overdue.

Here are just a few stats from each that clearly show their Hall of Fame worthiness.

Details for the induction ceremonies are not finalized yet but they will take place in August at the Pro Football Hall of Fame in Canton, Ohio during the Hall of Fame weekend that kicks off the NFL Pre-Season each year.