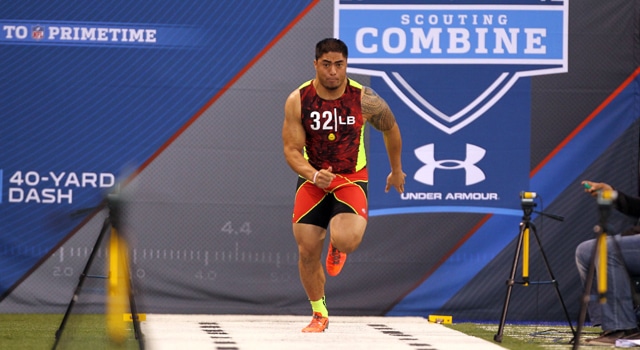 Long thought to be a first round pick throughout his senior season, Te’o draft fall began the night of January 7th in the national championship game.  Then there was the whole girlfriend hoax and all the drama that followed.

A poor showing at the NFL combine back in February featuring a 4.8 40 yard dash did not do much to help his slide.

Te’o rebounded at Notre Dame’s Pro Day in March, but that performance was not enough to get the Heisman runner up back into the first round, however.

The San Diego Chargers decided that all of the production Manti Te’o had on the field outweighed all of the off-field drama and poor 40 times when they decided to trade up in the 2nd round to select the Hawaiian native.

In San Diego Te’o will join a team with a rich tradition at linebacker headlined by one of the games all time greats – Junior Seau.

Despite running a slow 40 time, the Chargers may have gotten the steal of the draft.  You can’t coach leadership or instincts and Te’o is off the charts in both of those areas.  ESPN’s Todd McShay gushed about Te’o awareness and instincts after the Chargers made him their 2nd round selection while noting that Te’o does need to improve on his ability to shed blocks which is a fair criticism that could be many linebackers coming out of college.

Te’os draft slide luckily ended earlier than the slides of Brady Quinn and Jimmy Clausen over the last few years.  Te’o wisely chose not to attend the draft in person allowing him to avoid the type of publicity Quinn saw in 2008 and Geno Smith – the West Virginia quarterback selected one spot after Te’o – saw this year.

Te’o is the second Notre Dame player drafted this year with Tyler Eifert coming off the board last night as the first tight end selected when the Cincinnati Bengals took him with the 21st overall selection.

With Te’o off the board now, it is anyone’s guess as to who the next Notre Dame player will be.  Some scouts feel that Cierre Wood could sneak up draft boards because of his speed and athleticism.  Wood does not have great production numbers from his senior season since he was more of a change of pace back in 2012 behind Theo Riddick, but he performed very well at both the combine and Notre Dame’s Pro Day.

Other Notre Dame players who could be selected this week include Zeke Motta and Braxston Cave along with Wood and Riddick.  Robby Toma will likely find his way into an NFL training camp as well thanks to his 40 times.