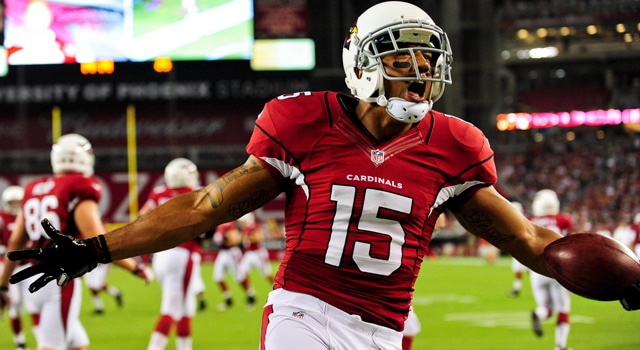 Saturday, October 20th, 2007, was one of the darker moments in Notre Dame football history.  The USC Trojans had run wild on the Fighting Irish, embarrassing Notre Dame 38-0 and handing ND its 7th loss of the season.  I remember asking my father, a lifelong fan, if Notre Dame would ever return to its former state of glory that I was too young to have witnessed.  All I had seen as an Irish fan were doom and despair.

“I don’t know,” he quietly returned.

And that was when my fear began, as my father is a patient man and one who knows football and its cycles better than anyone I have ever known.  If doubt had managed to creep into his mind, reason truly existed for alarm.  Notre Dame needed something, anything, to boost morale that arguably was at its lowest in the school’s glowing history.

Enter Michael Floyd.  Less than 24 hours after the Fighting Irish were forced to cry uncle at the hands of Pete Carroll’s USC Trojans, 5-star receiver Michael Floyd ended his recruitment and committed to Notre Dame.  It takes supreme maturity and leadership for a 5-star athlete, one who could play anywhere in America, to pledge his loyalty and talents to a program at its lowest moment.  Or, as many critics fairly pointed out at the time, it takes a large dosage of insanity.

Michael Floyd proved to everyone he made the right decision, tearing through the pages of Notre Dame’s record books without hesitation.  By the time Floyd left South Bend he became king of all Notre Dame wide receivers, owning school records for most receptions (271), most touchdown receptions (37), and most receiving yards (3,686).  Floyd also became the tenth player in Notre Dame history to be named a two-time team MVP.  His production rewarded him for his then-risky collegiate destination, and in 2012 Michael Floyd was the 13th overall selection in the NFL Draft by the Arizona Cardinals.

The expectations for Arizona’s 1st round draft choice were extremely high, which is why disappointment came over Phoenix when news spread Michael Floyd had failed to earn the number two position on the team depth chart, falling behind wide receivers Andre Roberts and Early Doucet.  Arizona leader and star NFL wide out, Larry Fitzgerald, was quick to support the former Notre Dame standout.

After a relatively disappointing training camp, Fitzgerald offered Floyd an opportunity to stay at his home to become better acquainted with the NFL and learn from one of the league’s best.  The two took a quick liking to one another, though their backgrounds are so similar that the connection was hardly surprising.  Both Fitzgerald and Floyd are large targets, standing a rangy 6’3” a piece.  In addition, both are Minnesota natives who made names for themselves by dominating the college football landscape before becoming 1st round draft choices.  As likely expected, Fitzgerald’s influence began to pay dividends.

As the season progressed, Floyd began to crawl his way up the depth chart.  In November, Floyd tasted his first success at Lambeau Field in Green Bay, hauling in 5 receptions for 80 yards in a loss to the Packers.  As Floyd said to The Arizona Republic about his improved play, “At first I was just out there just thinking, and you don’t really get a lot of your ability out when you’re just there thinking.  But once you get comfortable, everything comes to you naturally.”

Floyd saved his best for last in Arizona’s season finale against the San Francisco 49ers, the eventual NFC Champions.  Michael Floyd dominated the San Francisco defense, hauling in 8 receptions for 166 yards and a touchdown.

So, what does 2013 hold for the former 1st round draft choice heading into his second NFL season?  If NFL experts are to be believed, Floyd is on the verge of bursting onto the NFL scene.  Though only posting 45 receptions, 562 yards and 2 touchdowns in his rookie campaign, the indicator of future success came courtesy of Floyd’s late season rise.  Racking up impressive numbers against the 49ers in the last regular season game provided evidence the light bulb may have finally come on for the talented wide receiver.

Floyd earned the distinction this offseason as being dubbed by NFL.com as a wide receiver that will emerge in 2013.  With the addition of new head coach, Bruce Arians, the Cardinals will look to stretch defenses vertically, a capability the team will now possess with stable quarterback from the offseason acquisition of Carson Palmer.  Last season the Arizona offense was plagued by inefficient passing production, with four different quarterbacks starting during the season (John Skelton (6), Kevin Kolb (5), Ryan Lindley (4) and Brian Hoyer (1)).  If Arizona’s quarterback play improves, Fitzgerald and Floyd could quickly become one of the more dangerous wide receiver tandems in the NFL.

In 2007, Michael Floyd took a risk on Notre Dame and provided his alma mater with the best wide receiver production in ND history.  And it appears Floyd is poised to help Notre Dame once again by showing all young football recruits that Notre Dame can produce elite wide receivers in the NFL.