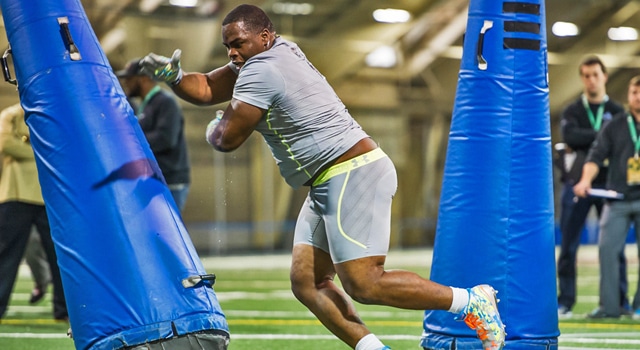 With Notre Dame’s spring practice schedule in the books, and with summer’s football malaise approaching, the focus of all Fighting Irish fans should be on an event that is critical to the success of every major football program, and one that Notre Dame has struggled with for nearly two decades: the NFL Draft.

What makes the University of Notre Dame unique is its sincere belief and success in educating its student athletes while also developing their athletic talents. While Notre Dame has never wavered in its ability to graduate its players, it cannot be denied that high school athletes dream of one day joining the pro ranks, and Notre Dame’s ability to launch players to Sundays has been crumbling.

The importance of success on draft day is perfectly illustrated by Notre Dame’s history at the tight end position, a success that has been able to land the Fighting Irish with the title of “Tight End U.” In the past seven years Notre Dame has placed all of its starting tight ends into the NFL, and every single one was drafted in the 2nd round or higher (Anthony Fasano (2nd), John Carlson (2nd), Kyle Rudolph (2nd), and Tyler Eifert (1st)). Notre Dame’s most recent tight end, Troy Niklas, is projected by CBS Sports to be a 2nd round draft selection, and scouts have been praising his upside and athletic ability as an offensive line recruit who started his freshman season at linebacker before ultimately continuing Notre Dame’s tradition at the tight end position.

“Niklas is the latest in a line of NFL tight ends produced by Notre Dame,” writes the scouting profile of Troy Niklas on NFL.com. While a simple, brief sentence, it’s oozing with publicity that can only be purchased by continuously developing talent. Success breeds success, and it shows on the recruiting trail.

Notre Dame was able to sign two 4-star tight ends in its last class, one of whom was blue-chip prospect Tyler Luatua, who chose Notre Dame over offers from the likes of USC, Florida and defending champion Florida State. Luatua even opted for Notre Dame over a scholarship offer from Alabama, a surprise given his brother is currently a member of the Crimson Tide’s roster. A similar situation is developing during the current recruiting class, with elite tight end Chris Clark leaning heavily toward Notre Dame, and admitting Notre Dame’s success at the tight end position is a strong factor under consideration.

If Notre Dame’s ability to develop NFL talent is connected to its long-term success, one look at Notre Dame’s draft history since the last national championship in 1988 clearly highlights why the Fighting Irish have been largely mediocre during the years after Holtz’s departure and before Brian Kelly’s arrival.

Notre Dame’s ability to produce elite, 1st round NFL talent has been nearly non-existent since Lou Holtz’s departure in 1997. Bob Davie and Charlie Weis each oversaw five different draft classes and were only able to produce one 1st round draft selection. Interestingly, Tyrone Willingham, who oversaw two fewer NFL Draft classes while head coach at Notre Dame, managed to produce one 1st round draft choice in former Irish center Jeff Faine, making Willingham’s production of 1st round selections slightly better than that of either Charlie Weis or Bob Davie.

Current head coach Brian Kelly has been turning the tide. Holtz is responsible for 67% of Notre Dame’s 1st round selections since 1988 while Brian Kelly can claim responsibility for 17% during his first four draft classes, with Willingham, Weis and Davie lagging at 5.3% each. Should former captain and offensive lineman Zach Martin be selected in the 1st round of this year’s draft along with fan favorite Louis Nix – and CBS Sports has projected both to go in the 1st round – Kelly will have produced five 1st round draft picks overall, quintupling the success of his predecessors Willingham, Weis and Davie.

The selection of Martin and Nix in the 1st round would upgrade Kelly’s stake from 17% of Notre Dame’s 1st round selections since 1988 to 20%, and it would mark the most successful start of all the coaches considered. While Holtz would eventually bombard the NFL with golden domers – including producing seven 1st round draft selections in just two years between 1993 and 1994 – Kelly has the distinction of being ahead of Holtz at the same stage of their career. Holtz produced three 1st round selections with his first five draft classes – Kelly is on the verge of having five 1st rounders during the same time period.

Brian Kelly has slammed the brakes on the alarming trend of Notre Dame’s failure to produce 1st round talent. Hopefully the 2014 NFL Draft will show that Notre Dame has no longer come to a stop on a problem, but instead is finally heading in the right direction.

Scott Janssen is a blogger for the Huffington Post and has authored several nationally-featured articles, including an appearance on MSNBC as a sports contributor. He talks football 24 hours a day, much to the chagrin of his fiancée. Scott can be reached at scottjanssenhp@gmail.com.