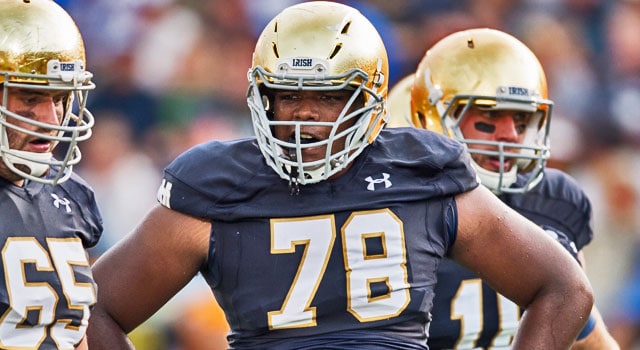 When Brian Kelly took over as head coach of Notre Dame’s football program in December of 2009, he had his work cut out for him.  In addition to inheriting a program that had just endured more losses in a three-year span than at any point in school history, Notre Dame’s NFL presence was nearly nonexistent.  The golden years of Lou Holtz developing 12 first round NFL selections had given way to Holtz’s successors producing only 3 in a span of 13 years.  Turning Notre Dame around would mean more than simply winning on the field – Kelly had to prove Notre Dame could still be a springboard to the NFL.

Although it took several years, that box was checked off the list in 2014 when Notre Dame had eight drafted players, tied for No. 2 overall with Alabama and only one shy of LSU’s nine.  The final step in repairing Notre Dame’s NFL reputation was transitioning from quantity of players to quality, and entering his seventh season in South Bend, Kelly has done just that.

Tight end standout Kyle Rudolph was drafted in the second round by the Minnesota Vikings in 2011 despite tearing his hamstring in his final season at Notre Dame, with the Vikings looking past his brutal injury and toward his unlimited potential.  Rudolph rewarded Minnesota’s gamble by being named Pro Bowl MVP in 2012, and inked a five-year $40 million extension in 2014.

Harrison Smith was a solid linebacker at Notre Dame before Brian Kelly arrived and moved him permanently to safety.  It was a position switch that would catapult his career, and one that enticed the Minnesota Vikings to dip into the Notre Dame talent well again in 2012, selecting Harrison with their first round pick.  Harrison, like Rudolph, did not disappoint, and was not only selected to the Pro Bowl in 2015 but was named by Pro Football Focus as the number one safety in the NFL last season.

All-American tight end Tyler Eifert kept Notre Dame’s first round momentum going when he was taken No. 21 overall by the Cincinnati Bengals in 2013.  Eifert posted a solid rookie campaign and was poised for a breakout season in 2014 when he suffered a dislocated elbow in early September, causing him to miss the rest of the year.  His breakout season was postponed until 2015 when he finished tied for No. 2 in the NFL in touchdown receptions with Odell Beckham, and even scored two more touchdowns than star tight end Rob Gronkowski despite inconsistent quarterback play and missing three games due to injury.

Notre Dame’s star left tackle, Zack Martin, has arguably outshined them all, and after only two NFL seasons is embarking on a career trajectory that currently points in the direction of Canton.  Taken as the No. 16 overall selection by the Dallas Cowboys in 2014, Martin won the starting right guard position as a rookie and helped anchor an offensive line that paved the way for DeMarco Murray to win the rushing title.  Martin was one of only three rookies to be named to the Pro Bowl and the first rookie to make the NFL’s All-Pro team since 1947.

The Class of 2016 looks equally bright.  Ronnie Stanley, Zack Martin’s replacement at left tackle, is widely considered to be one of the two best offensive tackles in this year’s draft class and is expected to be a top ten draft selection.  Producing another first round draft pick along the offensive line should skyrocket Notre Dame’s credibility at developing quality offensive linemen, and there appears to be no stoppage in sight.  Although not expected to go in the first round, many outlets have listed former Notre Dame center Nick Martin as one of the top two centers in this year’s draft.  And new starting left tackle Mike McGlinchey appears primed to pick up the mantle left by Martin and Stanley and become the next dominant tackle at Notre Dame.

The wildcard for Notre Dame’s current class is superstar linebacker Jaylon Smith.  Smith is one of the rarest talents to ever don a golden helmet and was widely considered to be taken No. 1 overall in this year’s draft prior to the devastating injury he suffered against Ohio State in the Fiesta Bowl.  Had Smith been drafted No. 1 overall it would have propelled Brian Kelly to heights not even Lou Holtz achieved.  The last Notre Dame player to be taken at the top of the draft was defensive end Walt Patulski in 1972, a product of coaching legend Ara Parseghian.  And while Smith will no longer be taken in the first round of this year’s draft, should his knee heal properly he possesses all the tools to be an NFL legend.

Brian Kelly has yet to take Notre Dame to the very top of the college football world, but he has restored the program’s ability to develop dominant NFL talent.  And after over a decade of poor NFL representation, Irish fans everywhere should appreciate Notre Dame’s long road to recovery and savor every name announced this weekend.