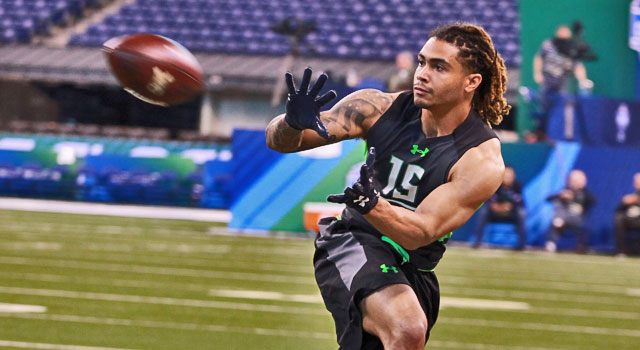 After years of avoiding a max exodus and early departures, Notre Dame lost four players this off-season who had eligibility remaining – Will Fuller, Keivarae Russell, CJ Prosise, and Jaylon Smith.  By the end of the second day of the 2016 NFL Draft, the quartet has been largely validated in their decisions.

On Thursday night, Will Fuller got things started for Notre Dame.  After Ronnie Stanley was selected with the 6th overall pick becoming the first Golden Domer selected in the top 10 since Bryant Young, Fuller was off the board at 21st overall.  The Houston Texans traded up in the first round to select Notre Dame’s dynamic, game changing wide receiver.  Heading into the draft, many thought Fuller was a fringe first rounder, but more likely a second rounder.  In fact, Fuller’s Draft grade that came back from the NFL Advisory Committee reportedly came back with a second round grade.

Fuller was not only off the board in the first round, he was the second wide receiver overall off the board after Baylor’s Corey Coleman was taken 15th overall by the Cleveland Browns.  Fuller’s seclection set off a run at wide receiver with TCU’s Josh Doctson and Ole Miss’s Laquan Treadwell immediately following Fuller.  The Philadelphia native now finds himself in a Houston offense fresh off signing Brock Osweiler and will be lining up opposite one of the game’s most dominating wide receivers DeAndre Hopkins.  In other words, Fuller is going to find himself in a lot of single coverage from day one.  First round pick? Young, promising quarterback?  Single coverage?  Fuller couldn’t have landed in a much better place.

Next off the board for Notre Dame was Jaylon Smith.  Heading into the Fiesta Bowl, Smith was guaranteed top 10 pick and likely a top 5 pick, but his nasty knee injury cast a lot doubt on his future.  With questions surrounding his knee, Smith still declared for the draft.  Two weeks ago that plan looked like it could have backfired as Smith started to plummet down draft boards following his evaluations at the combine, but Smith still ended up being selected at the beginning of the 2nd round by the Dallas Cowboys.

It could be argued that Smith could have sat out this year, rehabbed, and then entered next year’s draft and possibly worked his way back into the first round.  By leaving for the NFL and still landing in the top of the 2nd round, Smith will be able to rehab with a professional medical staff and as a 2nd rounder instead of a 1st round.  His first contract will also end in four years and the Cowboys will not have a 5th year option like they would if he was a first round pick meaning Smith will reach free agency and get to his second contract sooner where he will hopefully be able to recoup the millions he lost due to the injury.

Speaking of the money Smith lost, his first contract will likely end up costing him in the range of $10 MM.  He did have an insurance policy in place, but based on some earlier reports, it sounds like Smith will only be able to collect roughly $1 MM of the $5 MM policy – $700,000 for falling out of the first round and then another $200,000 ($100,000/pick he dropped) for where he landed in the 2nd round.

The most surprising selection up to this point for Notre Dame came in the third round with CJ Prosise to the Seahawks at #90 as the 4th running back overall taken.  The highest evaluation I had seen for Prosise heading into the draft was the third round and even those evaluations mentioned it might be optimistic.  Prosise has not even played a full season at running back, but with his speed and versatility, he ended up being one of the top 100 picks and goes to a Seahawks team looking to replace Marshawn Lynch.   Seattle’s offense has also been able essentially plug and play running backs when Lynch has been out over the last few years setting up Prosise with a good situation.  The only real negative here is that Prosise will be playing for Pete Carroll.

Rounding out Notre Dame’s early departure selections on Friday night was cornerback Keivarae Russell.  Heading into last season, Russell was considered to be a potential first round pick if he picked up right where he left off in 2013 before losing the 2014 season to suspension.  Russell had an up and down campaign in 2015, however, and Russell was projected to go anywhere from round 3-5 depending on the projection.  Kansas City selected Russell #74 overall in the beginning of the 3rd round inserting Russell into a pretty loaded secondary where he could potentially immediately step in and challenge for a starting spot.

Of the four Golden Domers who left early, Russell is probably the only one who could have really improved his stock by coming back in 2016.  Fuller likely got selected as high as he could have this year or next given his size.  Prosise would have come back into a loaded backfield and as a running back likely wouldn’t have been selected too much higher even with another big season given how the NFL undervalues running backs in the draft.