Riddick, Lewis-Moore Go in Round 6 Too 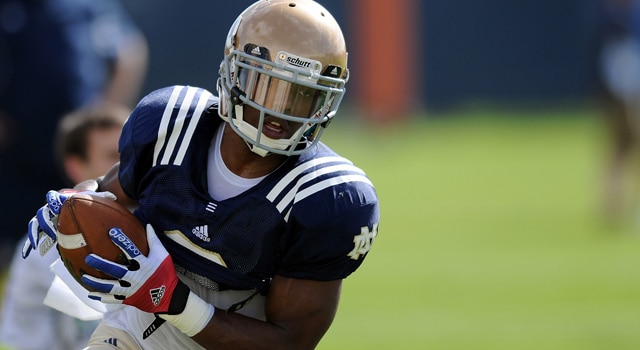 Another pair of Notre Dame players were selected in the 6th round of Saturday’s NFL Draft when Theo Riddick and Kapron Lewis-Moore both heard their names called before the final round of the 2013 Draft.

Theo Riddick, Notre Dame’s leading rusher in 2012, was selected with the 199th overall pick in the draft on Saturday by the Lions.  In Detroit Riddick joins a backfield featuring Michael Leshoure and free agent acquisition Reggie Bush which could make cracking the two deep a little tricky for the versatile New Jersey native.  His versatility though, could earn him some time on third downs if he is able to impress in camp and make the Lions Roster.

Riddick played both running back and wide receiver at Notre Dame before settling in at running back last year and establishing himself as Notre Dame’s go-to back even though Ceirre Wood was a 1,000 yard rusher in 2011.  Riddick piled up 917 yards on the ground in 2012 on 190 carries with five touchdowns.  He added another 370 yards and another two touchdowns on 36 receptions out of the backfield as well.

Riddick lacks top end speed, but his skills as a receiver will likely earn him at least a cup of coffee in the NFL.  His skillset actually lends itself quite nicely to the role of a 3rd down back.  Whether or not he can catch on in Detroit with a bit of a crowded backfield remains to be seen, but it’s a safe bet that Riddick will be on an opening day roster come September.

Kapron Lewis-Moore, like Jamoris Salughter, is currently rehabbing from an injury that he suffered in the first half of the National Championship game against Alabama.  Against the the Tide the Texas native and Notre Dame captain tore his ACL making it impossible for him to participate in physical drills at the combine.  Even with his injury, the Ravens decided that he was worth a 6th round selection even if he is unable to play at all in 2013.

“We had good grades on him. We believe in our medical staff. Now with ACLs, there is predictability in his recovery. We have some players that can play the position, but if we get into the middle of the season and he’s completely ready to go, there are no players on the street when you get to October and November. To be able to pull somebody like that out of the bullpen could be a bonus for us.”

Baltimore is an excellent place for Lewis-Moore not only to recover, but to start his NFL career.  He joins one of the best 3-4 defenses in all of football where his skillset as a strongside defensive end will fit in very well with what the Ravens do defensively.   For the 2013 season though, it is very likely that KLM will spend the season on injured reserve given the timing of his injury.

RELATED
Could Notre Dame Football's Alohi Gilman Be Drafted in the 4th Round?

Newsome has an eye for talent and is widely considered one of the best drafters in the league – another positive sign for Lewis-Moore’s NFL future.  The Ravens have routinely found  key contributors in the late rounds of drafts and have been one of the most successful franchises in the NFL over the last decade.  Again, Lewis-Moore could not have asked for a better place to start his NFL career.

Before the 7th round trio, Notre Dame saw tight end Tyler Eifert get picked in the 1st round by the Cincinnati Bengals, Manti Te’o in the 2nd round by the San Diego Chargers, and Jamoris Slaughter in the 6th by the Cleveland Browns.