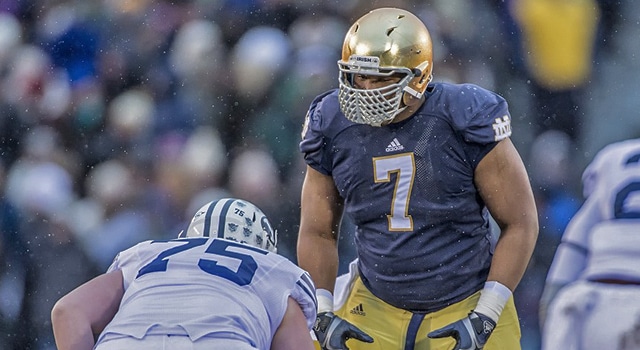 Day one of the NFL Draft did not go how Stephon Tuitt or Louis Nix had planned.  Both went undrafted on Thursday after leaving Notre Dame with eligibility remaining.  Stephon Tuitt didn’t have to wait too long Friday night to hear his name be called after the Pittsburgh Steelers selected him 46th overall.

Tuitt’s slide could end up helping him out in the long run as he landed with a franchise steeped in defensive tradition.  The Pittsburgh Steelers have always produced elite defensive talent and Tuitt now joins that lineage as he begins his professional career in a city where he played one of his most controversial games of his collegiate career.  During the 2013 season Tuitt was well on his way to a monster game against Pitt in Heinz Field when he was ejected for a questionable at best targetting penalty.

That atrocious call aside, Tuitt ended up landing in a pretty good spot.  The Steelers have a defensive system that caters to Tuitt’s strengths and experience as a defensive end in Notre Dame’s 3-4 defense which should allow for him to flourish.  There had been some talk of Tuitt getting drafted by a team utilizing a 4-3 defense and moving him inside which would have caused him to learn a new system but in Pittsburgh he should be able to hit the ground running.

The news is not as positive for Louis Nix as of yet.  With 51 picks in already, Nix remains on the board as one of the more surprising developments in this year’s draft.  Nix possess the kind of size that can’t be coached and is extremely hard to find making it surprising that he is still on the board at pick #52.

Former Notre Dame tight end Troy Niklas has yet to hear his name be called as well.  Niklas left after his junior season much to the surprise of Notre Dame fans – and coaches – but appears to be in real danger of snapping Notre Dame’s streak of producing 1st or 2nd round tight ends.

The only former Notre Dame player to hear his named called on Thursday was the one player who made the least headlines leading up to the draft – Zack Martin.  All Martin did since finishing one of the most impressive careers of any offensive lineman to ever wear a gold helmet is skyrocket up draft boards.  Martin ended up being selected 16th overall by the Dallas Cowboys.

With another round and a half of the draft on schedule for tonight it’s possible that both Nix and Niklas will know where they will begin their professional careers before the night is over, but for now they continue to wait to hear their name called.