Yesterday we took a look at the biggest Draft Steals in Notre Dame history.  Today we’ll take a 180 degree turn and look at their counterparts – the All Time Notre Dame Draft Busts.  As always, feel free to add to this list in the comments.  I will put together a post at the end of the week with the steals and busts which get left in the comments. 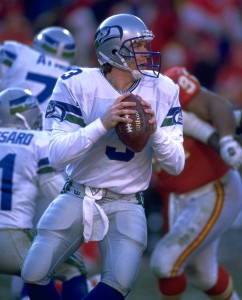 (1st Round – 2nd Overall) – Seattle Seahawks – 1992
It might not be fair to label a quarterback who broke rookie records for yards, attempts, and completions, but considering the hype surrounding Mirer (pictured right – Elsa Hasch/TSN/Icon SMI) coming out of college, it’s hard not to. Mirer was a golden boy quarterback at Notre Dame and was selected by the Seahawks with the 2nd overall pick in the 1992 Draft. He had an up and down rookie campaign, but could not improve that campaign over the course of an 11 year career that saw him get traded to the Bears for a first round pick only to be cut a year later. To be fair, Mirer played for a different offensive coordinator in each of his first three years which had to impact his development.

(1st Round – 14th Overall) – New York Giants – 1992
Our second Notre Dame Draft bust came 12 picks after our first bust in the same draft. The Giants selected Brown with the 14th overall pick in the draft hoping he’d be able to take over for another former Notre Dame tight end who had a great career for the Giants – Mark Bavaro. Instead, Brown ended up 43 receptions for 401 yards and 1 touchdown… in his entire career. If Mirer weren’t a quarterback, Brown would probably be #1 on this list. In Brown’s defense though, the ’92 Draft produced just one tight end to ever make a Pro Bowl – Mark Chumura.

(1st Round – 2nd Overall) – Seattle Seahawks – 1976
Niehaus was a standout for Notre Dame and ended up getting drafted 2nd overall by the Seahawks which was actually the first draft pick in Seahawks history. Niehaus had a stellar rookie season with 9.5 sacks to earn rookie of the year honors, but injuries caused him to start just six games over the next three seasons and he was out of the league by 1979. ESPN ranked Niehaus the 21st Biggest Draft Bust.

(1st Round – 1st Overall) – Buffalo Bills – 1972
When the biggest #1 overall busts are discussed, Patulski’s name usually comes up. Patulski was a consensus All American and Lombardi Award winner for the Irish in the early 70’s, but like our #3 Draft bust, injuries really stalled his development and cut his career short. Patulski spent just four seasons with the Bills and was out of the NFL by 1977.

(1st Round – 20th Overall) – New Orleans Saints – 1993
Irv Smith became a star at Notre Dame thanks in large part to his famous touchdown catch against Indiana in 1991 when, as a backup, he carried half of the Indiana defense on his back for a touchdown (Watch it Via YouTube) . He ended up having a great career for the Irish which he parlayed into a first round selection by the Saints. Unfortunately he never could make the same impact in the NFL

(1st Round – 12th Overall) – Buffalo Bills – 1983
Hunter is well represented in the Notre Dame record books at wide receiver. In fact, Michael Floyd just broke Hunter’s freshman receiving yards record this past season. Hunter was the 12th overall selection in 1983, but his career lasted just four years and ended with a 15 catch, 206 yard season in 1986.

(1st Round – 12th Overall) – New Orleans Saints – 1968
Hardy was an All World athlete at Notre Dame – a three sport star in football, baseball, and basketball. He was drafted by the Pirates out of high school, but went on to be a two time All American for the Irish on the gridiron. Hardy was selected 7th overall in the 1968 NFL Draft by the Saints, but he never played a game for New Orleans and had just a four year career without ever becoming a regular starter.

(1st Round – 17th Overall) – Washington Redskins – 1993
Carter had a long career and produced some decent stats (27 career interceptions), but if you ask most Redskin fans about some of their biggest draft busts in the last 20 years, Carter’s name is usually towards the top of the list. Carter was also listed by NBC Sports as one of the biggest Notre Dame Draft busts . Despite the strong interception total, Carter was known for getting beat just as often.

(1st Round – 10th Overall) – Chicago Bears – 1969
Seymour rewrote the Notre Dame receiving record books while he was with the Irish. He led Notre Dame in receiving for three seasons from 1966-68 before being selected with the 10th overall pick in the 1969 Draft by the Bears. Seymour caught just 21 passes for 385 yards and 5 touchdowns in three seasons with the Bears before he was out of the NFL. 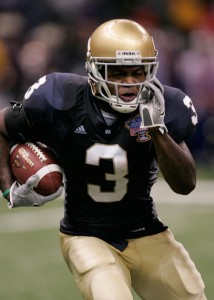 t might be a stretch to label a third round pick a bust, but when you consider that Williams actually left Notre Dame with a year of eligibility remaining it’s not that much of a stretch. Notre Dame fans remember Williams for getting burned often early in his career before having a strong senior season. With a year of eligibility remaining, Williams declared for the draft and ended up having a great performance at the combine. After being a third round selection by the Patriots, Williams suffered an ACL injury and never materialized in the NFL.

(Undrafted) – 2007
Darius Walker surprised everyone in 2007 when he decided to declare for the NFL Draft after the 2006 season as a true junior. Walker had the Notre Dame career rushing mark in his sights and wasn’t considered to be an elite prospect. He lacked ideal size and speed for the NFL level and as a result, he went undrafted in the ’07 Draft. He bounced around a bit as a free agent, but appears to be at the end of his NFL career already. Walker might not be able to be considered a bust since he wasn’t actually drafted, but his story definitely qualifies as the most bizarre Notre Dame Draft story. 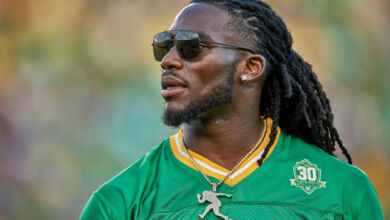