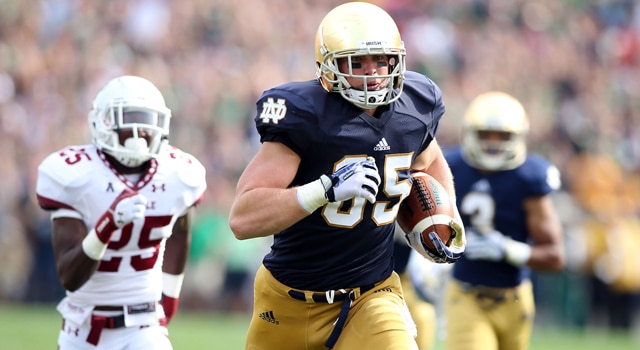 Just as I put the finishing touches on the article of Stephon Tuitt being drafted by the Pittsburgh Steelers noting that Troy Niklas could snap Notre Dame’s streak of producing 1st or 2nd round tight ends, the Arizona Cardinals made that statement null and void by taking Niklas #52 overall.

In a surprising move, Niklas finds himself off of the draft board before teammate Louis Nix – a player many felt would be the first, not fourth Notre Dame player selected in the 2014 NFL Draft back in December.  Instead, Zack Martin, Tuitt, and Niklas are now all off the board while Nix waits to hear his name called.

For Niklas, he lands in Arizona along with Notre Dame’s all-time leading receiver Michael Floyd in a high powered offense that also features All-Pro wide receiver Larry Fitzgerald.  The Cardinals are still in search of a long term answer at quarterback with Carson Palmer on the twilight of his career, but for 2014 they should feature a potent offense once again.  An offense that Niklas figures to be part of.

Niklas still has a lot of work to do at the NFL level after only playing tight end full time for two seasons and only starting for one, but he has all of the raw tools to be a great tight end.  In Arizona, he will also play in an offense that should create very favorable matchups for him given the firepower the Cardinals have at receiver.

Notre Dame has now had three players selected in the 2014 Draft with the Dallas Cowboys selecting #46  Zack Martin in the first round on Thursday night and the Steelers taking Stephon Tuitt at #46 earlier Friday night.   Nix should be the 4th Notre Dame player and barring a monumental upset, should hear his name called before Friday night’s draft festivities conclude.