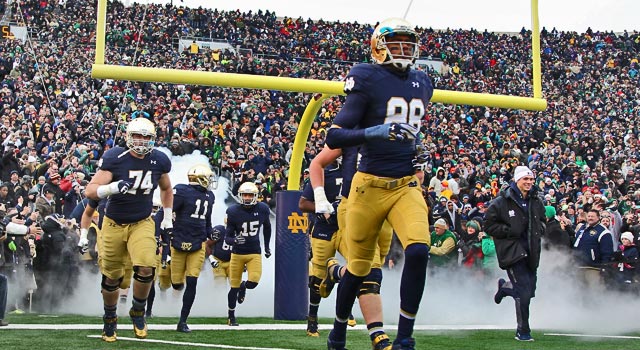 With Everett Golson transferring from Notre Dame the reins of the Irish offense will be passed to the inexperienced Malik Zaire.  Zaire has looked capable in his limited action, highlighted by his performance in last season’s bowl victory over LSU.  However, the redshirt sophomore quarterback will rely heavily on his weapons on the outside for success this season.

Zaire’s primary target will no doubt be Will Fuller, one of the premiere receivers in the nation, but someone will need to step up and provide a clear and reliable number two target to make Zaire more comfortable.  The two best candidates to fill the role are Chris Brown and Corey Robinson.  The senior and junior respectively are very different receivers but will be in competition for touches and the trust of Zaire in crucial situations.

Brown is a deep-threat but has battled consistency issues over his three seasons in South Bend.  The South Carolina native was second on the team in receiving yards last season with 548 but will need to increase that total this season.  With the Irish possessing a talented offensive line and Zaire being a mobile quarterback, Brown will have the time to beat defensive backs downfield and could put up big numbers.

Robinson on the other hand is a prototypical possession receiver and red-zone weapon.  The Texas native is also a solid route-runner, which will make him a friend of an inexperienced quarterback.  Robinson was second on the Irish in receptions and touchdown receptions and was third in receiving yards last season.  Robinson is a match-up nightmare due to his size and will be an inviting target for Zaire who can struggle with his accuracy, especially when forcing the ball into tight windows in the red-zone and on third down.

With CJ Prosise cross-training at running back it’s uncertain how much he will factor into the passing game, which puts more pressure on slot receiver Amir Carlisle.  Carlisle is a former running back but played well at receiver last year with his three receiving touchdowns being good for third on the team.  Notre Dame will need production out of the slot as opposing defenses will likely try to shut down Fuller and stop the run game.  With Carlisle becoming more comfortable with his position he could be poised to improve his numbers from last season.

The final key for the Irish to find a solid number two option at receiver is for the young players to step up and earn a spot or to push the veterans to elevate their play.  The likes of Torii Hunter Jr, Justin Brent, and Corey Holmes will all need to contribute in one way or another to the offense.  Hunter Jr is likely the most ready to make an impact as he should be fully-healed from many injuries that have caused him setbacks in his career and saw action in 10 games last season.

The tight ends and running backs will contribute to the Irish pass game but there is no doubt that Zaire will need career years from many of his receivers if Notre Dame plans on competing at an elite level this coming season.