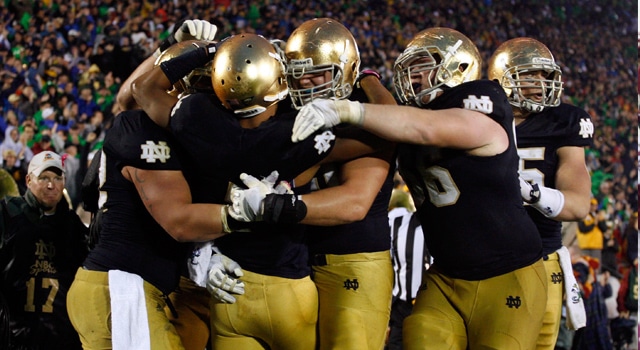 Earlier on Sunday Notre Dame found itself ranked 5th in both the Harris and Coaches Polls – the two human polls that are used to determine the BCS rankings.  Sunday night Notre Dame found itself in exactly the same position in the first BCS standings of the 2012 season even though the computer rankings like the Irish a little more than the human voters do.

Notre Dame, off to a 6-0 start for the first time since 2002, used its thrilling, overtime victory over then #17 ranked Stanford to move into the top 5 of both human polls after entering the weekend 7th.  Losses by #3 South Carolina and #4 West Virginia opened up two spots for Notre Dame to move up.

Defending national champion Alabama occupies the top spot in both human polls as well as the BCS with Florida coming in second thanks to  the computer polls.  The Gators are currently 3rd in the Harris Poll and 4th in the Coaches Poll, but #1 in the computer average pushing them ahead of Oregon who comes in 3rd despite being second in both human polls.  Kansas State, the only undefeated Big 12 team sits one spot ahead of the Irish in fourth position.

Should Notre Dame take care of business this weekend against BYU, something they should be able to do even if Everett Golson is unable to play due to his concussion, they should have a chance to move up again next week with Florida hosting #7 South Carolina, Kansas State traveling to take on 13 ranked West Virginia, and Oregon traveling to Tempe take on a tough Arizona State team on Thursday night.

Oklahoma, ranked 9th, is the highest ranked Notre Dame opponent in the first set of BCS standings with USC right on their heels at #10.  Stanford, despite the loss to Notre Dame, stayed in the top 20 right at #20.  No other Irish opponent is currently ranked in the first BCS rankings although Michigan is ranked 25th in the Coaches Poll.

Oklahoma by the way faces former Notre Dame head coach Charlie Weis and Kansas this weekend – a game that could get out of hand very, very quickly – which could set up Notre Dame for another appearance on College Gameday on the road this time when they travel to Norman in two weeks.

Notre Dame’s 5th place ranking is the highest BCS ranking for the Irish since the last week of the 2006 season.  Notre Dame has never gotten higher than 3rd in the BCS – a ranking they achieved in 2002 before getting upset by Boston College in Tyrone Willingham’s first season in South Bend.