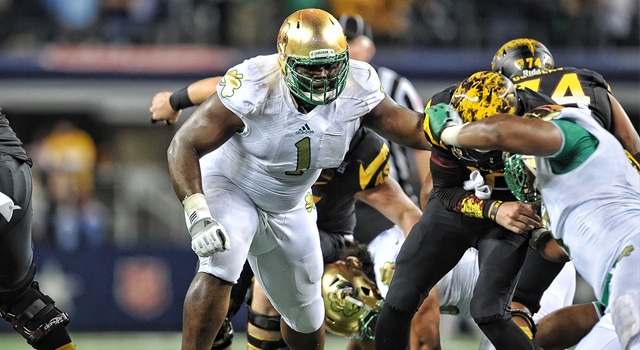 What may have started as a low, persistent murmur humming steadily in the background became a full-fledged cacophonous roar moments after Notre Dame fell in abysmal fashion to the Oklahoma Sooners.  Every negative comment and every unwanted hypothetical shed its wallflower status and rushed to the forefront to make its presence known.  Fighting Irish fans were booing players and ex-players were bashing fans on Twitter.  Media outlets sensed a wounded Irish program ailing in the water and attacked, with articles boasting headlines such as “Defensive drop-off has plagued Notre Dame this season” popping up endlessly around the country.  Even the Oklahoma Sooners, fresh off a road win in South Bend, began to question how significant their second career victory over Notre Dame truly was.

Beyond the fierce scrutiny and ever-loudening criticism housed the true issue: what was to be done about it?  Realizing serious problems with potential to derail the entire 2013 season is the first, easy step.  Crafting strategies to patch the holes is what separates a good coaching staff from a great one.

These questions hung over Notre Dame head coach Brian Kelly’s staff with the aura of a fog of fruitless inevitability.  How could an overabundance of offensive red flags be corrected in order to score enough points to defeat an Arizona State squad that hung 62 points on USC a week prior?  The answer was no one believed they could, neither Las Vegas nor any of the NBC sports analysts who all unanimously picked Arizona State as the undeniable victor in the pre-game coverage.

Kelly and staff showcased yet another example of why they should be considered one of the best coaching staffs in America.  While experts forecasted a quarterback controversy on the horizon, Notre Dame’s coaching staff focused on refitting the Irish offense to develop an effective rushing attack.  The Fighting Irish held the ball for over 34 minutes against Arizona State – the highest time of possession rating for Notre Dame all season – and were propelled by 37 rushing attempts, tied for the most ND carries to date.  But the upset victory over the Sun Devils was more than effective strategy – it came through improvement across the board.

RELATED
Could Shaun Crawford Return to Notre Dame for a 6th Year?

Tommy Rees, accumulating a ghastly 48.5 quarterback rating in his last two outings against Michigan State and Oklahoma, shook off his slump and threw for 279 yards and 3 touchdowns.  True freshman linebacker and former 5-star recruit Jaylon Smith burst onto the scene, offering fans a sneak peek at how special he will eventually become.  Smith chipped in 9 tackles with 1.5 tackles for loss as well as a forced fumble, though his true contributions involved nearly singlehandedly stalling two Arizona State drives, forcing two field goals in the process.  Prince Shembo awoke from the slumber of his giant potential and recorded 3 sacks, nearly matching the 4 sacks the Fighting Irish defense had mustered all season.  Even kicker Kyle Brindza joined the fray, drilling a 53-yard field goal and tying a Notre Dame record in the process.

The most important facet of Saturday’s upset of Arizona State was illustrated by how adversity was handled.  Notre Dame held a surprising 24-13 lead at the start of the 4th quarter after killing another Arizona State offensive drive courtesy of a Prince Shembo sack.  Facing 3rd and 10 on Notre Dame’s own 25 yard line, Rees took a snap, looked to his left and made an ill-advised pass into an area surrounded by three Arizona State defenders in zone coverage.  Sun Devil cornerback Osahon Irabor intercepted Rees’ pass and returned it 37-yards for a touchdown, pulling ASU within 4-points.  Notre Dame responded with a field goal, but within the first 8 minutes of the 4th quarter Arizona State had tied the game 27-27, with Notre Dame’s defense surrendering a 3rd and 20 in the process.

Given the relentless criticisms, the poor showings, the must-have nature of the game and an 11-point 4th quarter lead erased in minutes, it appeared Notre Dame would succumb to Arizona State.   In previous years such a decisive moment would have triggered the “here we go again mindset”, accepting a loss was forthcoming and unavoidable.  Instead, Notre Dame showed the finishing ability Brian Kelly has spent years trying to instill, and a Notre Dame unit that had every reason to throw in the towel responded, undaunted by the change in momentum.

Irish running back Cam McDaniel proved his mettle as a closer, piling up three rushing first downs with the elusiveness critics have claimed he lacks.  Kyle Brindza came through with a tiebreaking field goal and Notre Dame took a 30-27 lead, draining five minutes off the clock in the process.  The defense responded immediately, forcing Arizona State into a 4th and 13 on the very first drive.  In a moment no one could have predicted a mere week ago, ASU head coach Todd Graham opted to go for it rather than punt on his own 22-yard line with less than three minutes to go due to his defense’s inability to keep Notre Dame’s offense off the field.  Two interceptions and one Dan Fox game-clinching touchdown later, Notre Dame emerged from Dallas with a season-saving victory.

Notre Dame’s upset of Arizona State wasn’t always pretty but growth and maturity was witnessed in every facet of the Fighting Irish’s play.  And with this win Notre Dame moves to 4-2 on the season with only USC and an interim coach standing in the way of a 5-2 finish to the roughest part of Notre Dame’s schedule.  The Fighting Irish needed a win in Dallas to save the season from spiraling out of control, and they did it in prime time as an underdog with top rated recruits from Texas and Louisiana present.

On the trip back to South Bend, the only cacophonous roar heard will be courtesy of the jet’s engines.