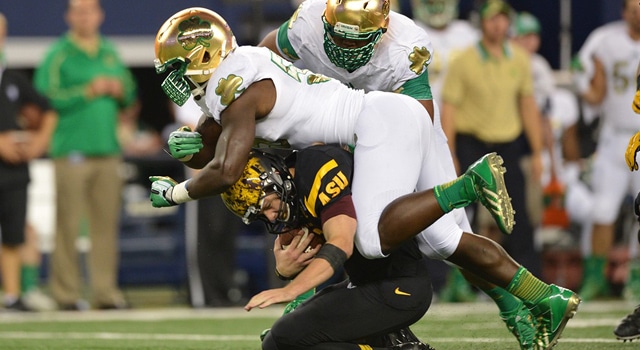 Notre Dame looked sluggish early, but came on strong in the second half Saturday before holding on to a three point victory over #22 ranked Arizona State for their fourth win of the season.

Before officially jumping into the five things I liked from Notre Dame’s 37-34 victory over Arizona State, it should go without saying that I LOVED the Notre Dame uniforms, helmets, shoes, gloves, etc.  The entire ensemble was great and was hands down the best Shamrock Series uniform to date and it’s not even close.  Ironically the replica jerseys being sold don’t do the real deal any justice or they would be a much hotter seller for Notre Dame.

Ok, now to the fun stuff since the Irish held on for the much needed win.

The play of the offensive line

We all know Tommy Rees isn’t going to evade many pass rushes and Arizona State decided to come after him early and often throughout the contest.  The Notre Dame offense line, however, rose to the occasion after a slow start and gave Rees a pocket to throw in all night long.  The Sun Devils did get their hands on a couple of passes at the line, but they didn’t sack Rees once.

In the second half there was a lot of room for the Irish running backs as well.  The backs didn’t always find it, but it was there.  Most notably, George Atkinson missed an open hole on 3rd and 1 at a critical juncture in the 4th quarter when there was more than enough room to get the first down.  That’s a whole other story though.  My point here is that the line more than did their job tonight from a blocking standpoint.  They did have some very untimely penalties including a false start in the 4th from Zack Martin, but when they were needed to give Rees time to pass, they answered the call.

The pass rush from Prince Shembo

Welcome to the 2013 season Prince Shembo.  Coming into last night’s game, Shembo did not have a single sack on the season.  In fact, he had just 13 tackles,  no sacks, and no tackles for loss.  Last night Shembo came through with 7 tackles and 3 HUGE sacks of Taylor Kelly all of which came int he second half.  As a team, Notre Dame had just four sacks through the first five games of the season.  Last night they had six for a loss of 45 yards.

With Stephon Tuitt still not quite the same player from a year ago, Notre Dame needs Shembo to have more nights like last night in order to close out this season strong.   Shembo’s pass rush seemed to rejuvenate the entire line last night when he started storming in after Kelly.  If that carries over against USC in two weeks, the Irish will have a good chance to find themselves victorious over their arch rival at home for the first time in over a decade.

The emergence of Jaylon Smith

Sometimes the recruiting services get it right when they label someone a 5-star prospect and it sure looks like they got it right with Jaylon Smith.  After a few uneventful games to start his career, Smith burst onto the scene last night and announced his presence to the college football world.  The freshman outside linebacker led the Irish with 9 tackles while picking up 1.5 tackles for loss.  He should have gotten credit for a sack too but it was credited as a “team” sack when Kelly surrendered on a second quarter rollout attempt on 3rd down too.

Smith was all over the field last night and was a primary reason the Irish were not trailing by more than six points because of his play in the redzone to help force a couple of field goals early on while the Irish offense was struggling.  Smith also forced a fumble and broke up a pass on the night.  Arizona State looked like they were specifically targetting him on some quick passes, but Smith responded by flying to the ball like a heat syncing missile.

This kid is going to be a whole lot of fun to watch for the next few years.

The clutch catching and returning of TJ Jones

TJ Jones had a quiet couple of weeks after a fast start to the season, but was back in the spotlight light night with one of the best performances of his career.  Jones hauled in 8 Tommy Rees passes for 135 yards – his second 100 yard performance of the season – and a touchdown.  He nearly added a second touchdown in the third quarter too with a 27 punt return where he was tripped up with one man to beat on a play you could tell he was frustrated over since he probably makes that one guy miss nine times out of ten.

Regardless of his near miss in the return game, Jones was sharp on Saturday night in picking up his second 100+ yard game of the season.  Anytime the ball was in his vicinity, he caught it and usually picked up some yards after the catch as well.

The turnovers from the Notre Dame defense

The Notre Dame defense hasn’t been coming up with big turnovers when they are needed this season as they did a year ago.  That changed a bit on Saturday night though with the Irish creating three second half turnovers of the Sun Devils, including a pick six from Dan Fox with just over a minute to go.  Matthias Farley added an interception of his own in the final two minutes and earlier in the second half Bennett Jackson made a heck of a play to force a fumble that led to Troy Niklas’s touchdown grab.

Now, it could be argued that Farley in all honesty should have just batted down his interception since it would have given the Irish the ball at the ASU 20 in chip shot field goal range instead of near midfield after a block in the back penalty and that Fox should have taken a knee instead of diving into the endzone to ice the game, but seeing the Notre Dame defense create turnovers was a welcomed sight.

Notre Dame wouldn’t have beaten Stanford or Michigan last year without creating turnovers and they will need to do more of what they did last night over the final six games of the season.