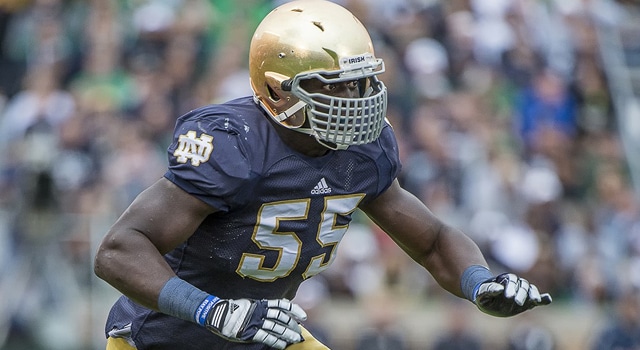 Notre Dame is still trying to find consistency five games into the 2013 season.  At times the Irish look strong, but have yet to put a full game together where they execute from start to finish.  The Irish will need a complete effort this weekend to answer their critics and avoid a back-breaking third loss of the season.  The opponent the Irish will need to beat to avoid a disastrous first half of the season is Arizona State.  The Sun Devils come into the game off an annihilation of USC in which they put up 62 points.  The following are the matchups the Irish must win to continue their success in Shamrock Series games:

Jarrett Grace versus Marion Grice:  Irish linebacker Jarrett Grace, like the Irish, is searching for consistency in his play.  Grace leads the Irish in tackles with 37 but has not established himself as the dominant force the Irish need in the middle.  Grace will need to be on his game against the run and shore up his problems in coverage in order to stop the Sun Devils all-purpose workhorse running back Marion Grice.  The Sun Devils utilize Grice in both the run game and the pass game as he is the team’s primary rusher and one of the team’s top receivers.  Grice lead the team in both rushing and receiving touchdowns and has a total of 12 scores on the year.  Grice is one of the keys to the Sun Devils explosive offense and must be slowed down if the Irish hope to win.

Prince Shembo versus Taylor Kelly:  Another Irish linebacker in need of a big game is Prince Shembo.  Shembo leads the Irish in quarterback hurries but hasn’t experienced the success he had last season in getting to the quarterback and ceiling the edge.  Shembo will need to disrupt and contain Sun Devils signal-caller Taylor Kelly.  Kelly is the face of an offense putting up 44 points a game so far this season and is a good passer who can also run the ball.  Kelly has thrown for 1370 yards and 11 touchdowns so far this season, while also being third on the team with 124 rushing yards.  Shembo will need to get to Kelly because if he has time he will pick apart the Irish defense and also will need to contain Kelly when things breakdown and not allow him to make plays outside of the pocket.

KeiVarae Russell versus Jaelen Strong:  Notre Dame’s corners will be under the microscope against a high-powered passing attack like Arizona State, especially KeiVarae Russell.  Russell has had ups and downs this season while totalling a team-high four pass breakups.  The Irish sophomore will be charged with shutting down Arizona State’s Jaelen Strong.  Strong is a big receiver at 6’4’’ and leads the Sun Devils with 31 catches for 433 yards.  Strong is Taylor Kelly’s favorite target as he presents matchup problems for any corner so Russell will need to be at his best to hold Strong below 100 yards receiving.

DaVaris Daniels versus Alden Darby:  Notre Dame’s big play threat Davaris Daniels has been held in check the past two weeks, largely due to the inability of Tommy Rees to the throw the deep ball with any consistency.  Daniels will need to find a way to make big plays by any means necessary this week because if the Irish offense struggles they likely won’t be able to keep up with Arizona State’s ability to score points.  Trying to stop Daniels from making big plays will be Sun Devils safety Alden Darby.  Darby is a small safety at 5’11’’ 195 pounds but leads the Sun Devils is interceptions, pass breakups and defenses.  Daniels must exploit Darby by getting behind him on deep routes using his speed and physically beating him for yards after the catch as well as positioning on tight sideline routes and routes over the middle of the field.