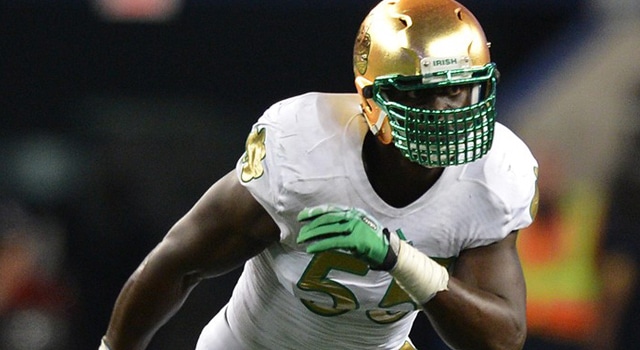 Notre Dame finally put together an inspired effort in the 2013 season and it resulted in a hard fought 37-34 victory over Arizona State.  The Irish turned up the intensity after leading tackler Jarrett Grace and senior receiver Daniel Smith went down with devastating injuries.  Notre Dame still made mistakes with turnovers and penalties but the offense was clicking as multiple pieces were involved in moving the ball.  The Irish defense also began to look like a big time unit again forcing turnovers and pressuring the quarterback.  The following players were the catalysts in the Irish victory:

True freshman Jaylon Smith played hands down his best game of the season versus the Sun Devils.  Smith was flying around the field making plays and showing the potential everyone talks about.  Smith had a team leading nine tackles, including 1.5 for a loss as well as a forced fumble and pass breakup.  Smith did a good job of containing Taylor Kelly and the Sun Devils outside run game, making two touchdown saving tackles.

It had been a slow season for Irish linebacker Prince Shembo until Saturday night when he showed up in a big way.  Shembo simply could not be blocked in the second half causing Taylor Kelly all sorts of headaches as the whole Sun Devils offense was thrown off by his pressure.  Shembo had seven tackles and three sacks in the win and was instrumental in emotionally leading the Irish defense.

Irish receiver T.J. Jones put together another great effort in the Irish victory.  As Tommy Rees’s favorite target Jones had a team-high eight receptions for 135 yards and a touchdown.  Jones continued to be reliable when the Irish needed a big play and led a pass-heavy attack in the second half as the run game was struggling.  Jones also had a 27 yard punt return in which he ran through arm tackles and looked explosive.

Notre Dame kicker Kyle Brindza stepped up after an early missed field goal and was clutch for the Irish.  After shanking a kick in the first quarter Brindza connected on his next three field goals, including a career-long 53 yarder.  Brindza’s field goals came at crucial times as they always kept the Sun Devils just out of reach.  Brindza was also strong on kickoffs, kicking seven touchbacks on eight kicks and averaged over 50 yards per punt to help keep the Irish in control of the field position game.