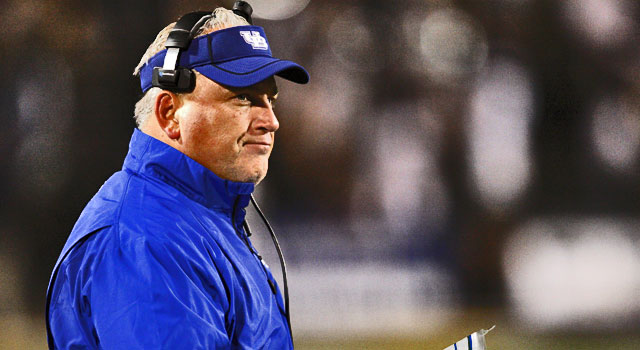 While we know that Notre Dame will reportedly be replacing three coaches this off-season in Kerry Cooks, Matt Lafluer, and Tony Alford; we still have no official word on any of their replacements.  That hasn’t, however, stopped the rumors from flying.

The most recent rumors point to Jeff Quinn, most recently the head coach at Buffalo for four and a half seasons, being reunited with Brian Kelly.  Quinn spent 19 seasons working for Brian Kelly at Grand Valley State, Central Michigan, and Cincinnati before taking on the head coaching job with Buffalo when Kelly was hired by Notre Dame to take over the program.  So there is obviously a lot of history between the two.  Where there is not a lot of history, however, is with Quinn coaching quarterbacks – the position he would presumably be placed in charge of at Notre Dame.

Prior to becoming a head coach, Jeff Quinn coached the offensive line on top of offensive coordinator duties.  Given Harry Hiestand has proven to be a top notch recruiter and solid offensive line coach for the Irish, it’s hard to imagine any scenario where he wouldn’t have the same role next year.  That would mean either Quinn would be tasked with coaching the quarterbacks or perhaps Kelly would take on that role officially while finding another spot for Quinn.

Quinn would be replacing Matt Lafluer who left after just one year on the job in South Bend to return to the NFL as part of Dan Quinn’s first staff with the Atlanta Falcons.

Rumors have been flying for days now that Cooks’ replacement will be a familiar name for Notre Dame fans.  Todd Lyght, an All-American corner and integral member of the 1988 National Championship team, has been linked to the opening at Notre Dame after a very brief stint with Vanderbilt.  Lyght was hired by the Commodores after leaving the Eagles following the 2014 season and could be headed back to his alma mater before ever even coaching a single practice at Vandy.  Lyght’s addition seems to be the most certain as of now given the number of reports linking him to Notre Dame.

Replacing Tony Alford could be the most important hire Brian Kelly ever makes at Notre Dame.  Alford was one of the best recruiters in the country and is the primary reason there are three running backs from the state of Florida on 2015 Notre Dame roster but he left to join Urban Meyer at Ohio State leaving Kelly with a big void to fill from a recruiting standpoint.  There have been rumors that Notre Dame’s All-Time leading rusher, Autry Denson, could be headed back to Notre Dame to coach the Irish backs, but those rumors appear to be the most up in the air right now.

These hires could very well be make or break for Brian Kelly at Notre Dame.  After going 17-9 the last two seasons, Kelly faces a critical off-season so he needs whoever he hires to be able to produce results on the field.  At the same time, Kelly lost two of his top recruiters in Cooks and Alford who were in charge of recruiting two of the most talent rich states in the country – Texas and Florida respectively.  That means Kelly has to hire some recruiting firepower as well.

The three names above are all very intriguing hires, but most are largely unproven on the recruiting front.  Quinn hasn’t had much experience recruiting against elite programs after his previous stints while Lyght and Denson are still at the early stages of their careers and don’t have a great deal of experience recruiting either.  Denson does, however, have some great ties to the state of Florida, his home state, where he played a few seasons of professional football for the Dolphins and Buccaneers.  Still, adding two unproven recruiters to replace two of his best would be a risky move to say the least for Kelly.

What’s important to note, however, is that none of these coaches have been officially announcement by the University.  Lyght seems like the most definite of the group while Denson’s name is only been speculated about thus far given his ties to Notre Dame.

It’s also important to note that the last time Brian Kelly had to replace three assistants in an off-season including some that left to join Meyer at Ohio State, was following the 2011 season.  Kelly added Harry Hiestand, Scott Booker, and Bob Elliot that off-season and the following season the Irish went 12-0 before running into the Alabama buzz saw.

We likely won’t know for a little given the time it typcially takes for an assistant coach to clear all of the University processes.  Last year it was reported that Brian VanGorder would replace Bob Diaco over two weeks before he was officially introduced by Notre Dame.  Given there will be three coaches to introduce and Signing Day has already come and past, it’s possible the wait could be longer this time around if Notre Dame wants to announce all three at the same time.