Notre Dame Battles through Noise, Distractions to Prepare for Miami 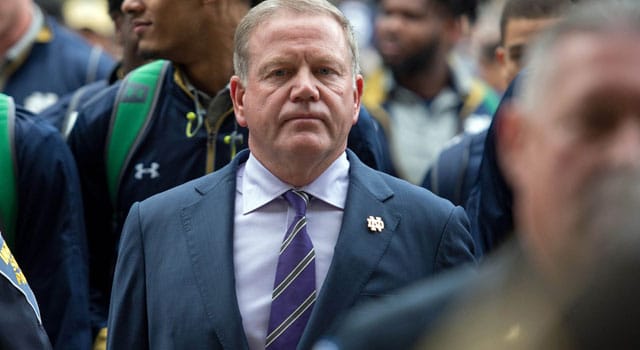 It’s probably the understatement of the year, but Notre Dame’s 2016 football season has not gone according to plan.  This fall was one of tremendous promise and expectations after Notre Dame posted double digits in the victory column for only the second time in head coach Brian Kelly’s tenure in South Bend In 2015, and fell just shy of a playoff berth.  Both Malik Zaire and DeShone Kizer were named to Heisman Trophy watch lists and NFL experts drooled over a Notre Dame offensive line that continues to churn out high draft picks, with Pro Football Focus even being so bold as to name ND’s line the best in the nation.

Now at the bye week with a 2-5 record on the heels of losing to arguably the least talented Stanford team since before Jim Harbaugh roamed the streets of Palo Alto, Brian Kelly faces a new challenge: keeping his team focused while the noise and distractions around the program ramp up in intensity.  The distractions have become so potent that they teeter on the brink of the absurd, such as this article listing Urban Meyer as a potential replacement for Kelly and naming Lane Kiffin – uh, what? – to the top of the replacement list.  Despite the foolish chatter coming from all angles, there were some distractions with merit.

The long-term future of Notre Dame’s defense took a hit with the decommitment of 4-star defensive tackle Donovan Jeter, who boasts an elite list of suitors that includes Alabama, Michigan and Ohio State.  Every Irish fan knows the defensive line is one area where Notre Dame can ill-afford to lose talent, but the most devastating part of Jeter’s decommitment involved his rationale for leaving, which began with a phone call from Michigan’s defensive line coach Greg Mattison, the same Michigan assistant who did everything in his power to convince Jaylon Smith to leave Notre Dame after defensive coordinator Bob Diaco left to fill the head coaching vacancy at Connecticut.

“[Mattison] was like, ‘I still want you real bad,’” Jeter told the media.  “I look and Michigan is undefeated and Notre Dame is 2-5.  Nothing against Notre Dame.  They’ve had some tough losses.  I have to find a place that’s home and a place that fits me.  Notre Dame fits me.  But I want to explore my options.  I went on one visit and committed.  That’s like marrying the first girl you kissed.”

Being compared to a girl you just don’t want to settle down with wasn’t a great way to start the week – Jeter committed to Michigan over the weekend and then took a shot at Brian Kelly.

Jeter did later apologize over Twitter but it still wasn’t a good look for Brian Kelly.

The bad news of losing Jeter was at least partially mitigated by gaining the commitment of 4-star defensive back Elijah Hicks.  But the distractions confronting the team weren’t all external.  Sadly, a damaging one came from within.

Tillery’s defense is an interesting one given the literal definition of the word “like” is to “wish or prefer”, but the oddity of watching a starter on Notre Dame’s team being forced to backtrack his support of bringing in another head coach is the perfect symbol for the 2016 season.  And Brian Kelly must deal with all of these off-the-field nuisances while preparing for a Miami Hurricane program that, despite its 4-3 record, is showing signs the “U” will eventually become a dominant program again under new head coach Mark Richt.

Notre Dame’s defense has yet to be tested by a truly gifted passing quarterback but that is exactly what they will face in Miami quarterback Brad Kaaya.  The junior and former 4-star recruit has thrown for 1,696 yards this season – good enough to be No. 30 nationally – and managed 323 yards passing and two touchdowns against a Virginia Tech defense that is ranked 10th nationally.  And while Miami’s defense is not as highly regarded as Virginia Tech’s, it’s also not too far off.  The Hurricanes boast the 12th ranked scoring defense in the country, which is bad news for a Notre Dame offense that has only managed 13 points over the last two games.

This week has been a difficult one for the Notre Dame program, but it should also serve as a warning.  If Brian Kelly is unable to find a way to keep his team focused with all the negativity surrounding the program now, a decommitment and questionable twitter usage will be the least of his worries moving forward.