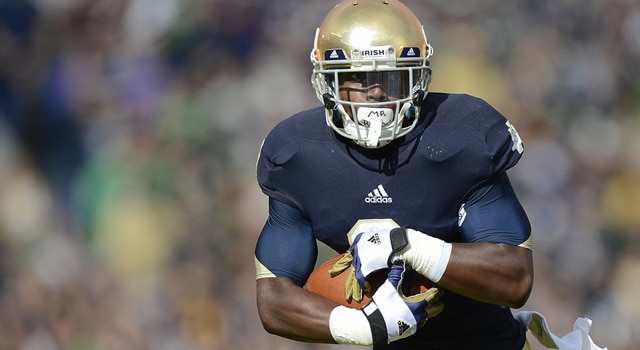 Notre Dame is coming off a miraculous comeback victory over Pittsburgh to remain unbeaten at 9-0, as they prepare to visit long-time rival Boston College.  The two catholic institutions have had plenty of memorable battles on the gridiron, and the Eagles will look to add another to the list by spoiling the Irish’s party this Saturday.  The following are this week’s key matchups for the clash between the Irish and the Eagles:

Following in Luke Kuechly’s footsteps is Nick Clancy.  The Eagles linebacker is a tackle machine, boasting 107 thus far this season.  Clancy is also stellar in pass coverage with an impressive eight breakups in nine games.  Irish running back Theo Riddick is coming off a strong performance versus Pittsburgh, in which he elevated his game in the latter stages.  Riddick possesses the ability to catch the ball out of the backfield as well as run, both of which will be tested by Clancy.  Riddick will also be responsible for picking up Clancy when he blitzes, so it is crucial Riddick play at a high level from the start.

Boston College’s junior defensive end Kasim Edebali will present challenges for the Irish offensive line.  Edebali, a native of Germany, has played in eight of Boston College’s nine games, registering 40 tackles, five tackles for loss, 1.5 sacks, and a fumble recovery.  Notre Dame’s junior right tackle Christian Lombard will face a mix of speed rushing and power in Edebali, so he will need to do an excellent job of pass-blocking and also be a part of setting the edge for the Irish running backs to be able to reach the second level.

It’s no secret; the Eagles want to get the ball to Alex Amidon.  Amidon leads the Eagles with 67 receptions, more than double the 29 of second place Johnathan Coleman.  Amidon averages 119 yards receiving per game and has tallied a team leading 6 touchdowns receiving to go along with a rushing touchdown.  Bennett Jackson has seen his fair share of top-notch receivers this season, from Kenny Stiles to Phillip Dorsett.  Jackson will need to continue his quality play as Boston College will target him in an effort to get the ball to Amidon.

Notre Dame versus itself

Although the Irish pulled out a win versus Pitt, the game would never have been in doubt if it wasn’t for mental mistakes by the Irish.  Notre Dame possesses a large talent advantage over Boston College; therefore, if they can eliminate needless penalties and turnovers they should win handily.  The Irish also must limit coaching mistakes by making things less complicated in short yardage when a quarterback sneak will do.  Finally Notre Dame must give Everett Golson the reigns and let him play his prototypical primetime road game as he has done versus Michigan State and Oklahoma.