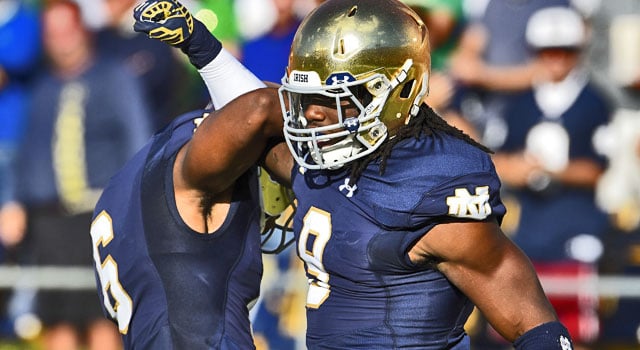 All eyes will be on Death Valley Saturday night when the undefeated Irish face their toughest test of the season thus far versus Clemson. The Tigers also come into the game undefeated with a 3-0 record. The primetime showdown promises to be a physical one as players on both teams have already exchanged remarks via Twitter and in the media. Whichever team does more talking with its play will make one of the biggest statements of the young college football season and emerge as a true championship contender. The following are the key matchups the Irish must control to defeat Clemson:

Will Fuller versus Mackensie Alexander

Saturday night will feature one of the best individual matchups of the college football season when Fuller and Alexander face off. Alexander is the self-proclaimed best cornerback in college football, while Clemson’s defensive coordinator Brent Venables called Fuller the best receiver in the country. Alexander is a true lockdown corner who will be able to stay with Fuller on deep routes for the most part, likely needing safety help less often than most corners would. If Fuller can make plays downfield and draw safety Jayron Kearse over to help Alexander it will open up the box for C.J. Prosise as well as allow more room for other receivers to make plays.

Star left tackle Ronnie Stanley will face one of his toughest tests of the season in defensive end Shaq Lawson. Stanley is one of the leaders of a dominant Irish offensive line that has allowed the Irish to run the ball well and avoid sacks. Lawson has NFL skills and can cause havoc in the backfield with 2.5 sacks and five tackles for loss through three games this season. With DeShone Kizer making his first road start it will be especially important that Lawson is contained so the run can be established and a clean pocket can exist for the Irish quarterback to throw the ball downfield.

In another excellent matchup one of the country’s premier linebackers will try to contain a talented dual-threat quarterback. Smith is one of the best athletes in college football, which should allow him to limit the damage Watson can do scrambling as well as being able to get after the Tigers quarterback in the pass rush. The Irish will likely use Smith to spy Watson as they did to Tyrone Swoops of Texas and turn him into a pocket passer. If this succeeds the Irish could force Watson into bad decisions throwing the football as he already has three interceptions on the season.

Notre Dame defensive back KeiVarae Russell is no stranger to matching-up against elite receivers, and he will face another one in Clemson’s Artavis Scott. Russell has picked up where he left off after missing all of last season due to a suspension and is once again Notre Dame’s best defensive back, with a knack for making crucial plays. Scott is a big-play threat and is Watson’s favorite target, with 20 receptions on the season. If Russell can contain Scott’s big play ability and make Clemson nickel and dime their way downfield the Irish defense will be in good shape to succeed.