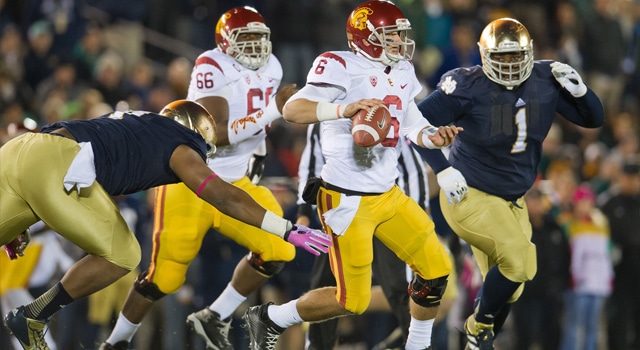 Notre Dame’s defense has been an enigma since the moment Irish fans and critics watched rookie Temple quarterback Connor Reilly rack up nearly 300 total yards at Notre Dame Stadium to kick off the 2013 season.  The mystery deepened the following week as the Michigan Wolverines piled on nearly 500 yards, and descended into full-fledged criticism when the Fighting Irish were forced into a come-from-behind situation against a Purdue Boilermakers squad that currently boasts a 1-6 record on the season.

The loss of 2012 defensive starters Manti Te’o, Kapron Lewis-Moore, Danny Spond and Zeke Motta has left Notre Dame with a defensive unit littered with talent but lacking in leadership, witnessed by an up-and-down style of play that has largely characterized the season to date.  While the light bulb began to flicker intermittently in an upset win over Arizona State, the persistent and unshakable question marks hauntingly cast their darkest shadow as starting Notre Dame quarterback Tommy Rees was assisted to the sideline inside an abruptly silent Notre Dame Stadium.  With the prospect of scoring additional points becoming doubtful, could Notre Dame nurse a narrow 4-point lead for an entire half?  A disappointing outcome seemed inevitable.

There have been moments during Notre Dame head coach Brian Kelly’s tenure that will long be remembered.  Holding Stanford at the goal line in overtime on 4th and 1 to preserve an unpredictable unblemished record.  Yet another 4th and 1 stop at the goal line against USC at the Coliseum, which clinched Notre Dame’s first national championship appearance in decades.  Both legendary defensive moments added to an already illustrious vault of program accomplishments.  But the defensive performance put forth by Notre Dame against USC in 2013, with the future of the season and the prospect of six consecutive home losses to the Trojans on the line, arguably tops them all despite lacking a climatic 4th and goal backdrop.

Notre Dame’s defense finally broke free of its self-imposed leash and released pure havoc on a USC offense that had begun to find its niche in the post-Kiffin era.  Prior to Rees’ injury the Irish defense had surrendered 10 points and 238 yards on 42 plays – mostly accrued in the first half alone – an average of 5.66 yards per snap.  After Rees’ permanent game exit the defense erected a collegiate version of the Steel Curtain, shutting out the USC offense while only allowing 61 yards on 25 plays.  The Notre Dame resistance netted the Trojan offense a subdued 2.44 yards per play, cutting the average yardage total by more than half.

The defense was so dominant that not even the nominal second half offensive production – Notre Dame would only muster 28 yards after Rees’ injury – and horrendous field position, which essentially left the Irish defense fighting with both hands tied behind its back, could slow them down.  The Trojans had six offensive possessions post-Tommy Rees, four of which began in Notre Dame territory.  Yet still Notre Dame’s defense remained, unflinching.

The relentlessness and physicality of the Irish defensive attack made its presence known in every corner of the Trojans offense.  The Irish can be credited with forcing seven USC penalties from the middle of the 3rd quarter until game’s end due to constant defensive pressure.  The Trojans were penalized four times for offensive holding, two from offensive tackle Aundrey Walker and two from offensive guard Max Tuerk.  The speed of the Irish pass rush took its toll on the Trojan psyche, leading to three false starts.  USC offensive tackle Chad Wheeler jumped twice while tight end Jalen Cope-Fitzpatrick joined the penalized multitude by flinching once.

Even USC’s holding and snap-jumping could not prevent Notre Dame’s defensive penetration.  The Fighting Irish stockpiled four tackles for loss or sacks in just six Trojan offensive possessions.  Emerging freshman superstar Jaylon Smith managed an awe-inspiring tackle in the backfield before several USC offensive linemen had the opportunity to emerge from their stances.  And, most critically of all, on 4th and 20 late in the 4th quarter, when Notre Dame truly needed a play to seal USC’s fate, defensive end Stephon Tuitt managed to sack Trojan quarterback Cody Kessler with only a 3-man rush, effortlessly tossing a Trojan offensive lineman aside in the process.

That’s what leaders do.  That’s what pre-season All-Americans can accomplish.  That’s how future 1st round NFL draft selections play the game.

Notre Dame faced its toughest adversity of the season against USC when Tommy Rees left the game due to injury.  Not only did the Fighting Irish rise to the occasion, but they did it as a team, and their love and support of one another came through as clearly as the high definition coverage provided by NBC.  It was a perfect environment to host many of the nation’s most high-profile high school recruits who witnessed the victory and camaraderie in person in droves.

Notre Dame’s crucial prime time victory over rival USC may have appeared foul, but it led to the sweetest of outcomes.