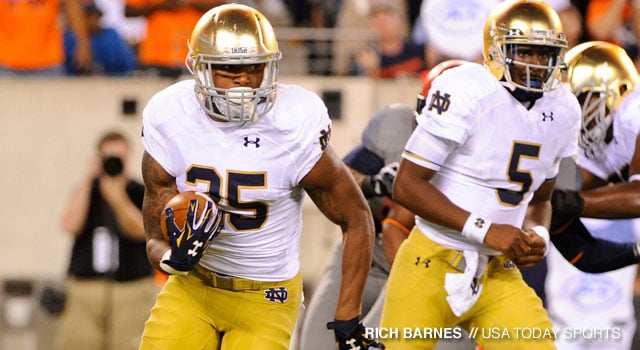 All eyes will be on Tallahassee this week for a top five showdown when Notre Dame faces Florida State.  The Irish will be the underdog as they try to end the nation’s longest winning streak held by the Seminoles by knocking off Jameis Winston and the defending national champions.  Both teams bring dangerous offenses into the game so the outcome could be determined by which defense plays the best as well as if the Irish can win the turnover battle.  It is without question that the Irish will need to play their best to beat the Seminoles and make a statement to the rest of college football that they are a contender to win it all this season.  The following are the matchups the Irish must win to be victorious versus Florida State:

Cody Riggs versus Rashad Greene:  Irish cornerback Cody Riggs will face his toughest test of the season so far when he will attempt to shutdown Rashad Greene.  Greene is by far the most important weapon to the Seminoles offense as he has 20 more receptions and 400 more receiving yards than any other Seminole in a pass-happy offense.  Greene possesses excellent speed so Riggs will need to make sure his fellow Florida native doesn’t get behind him and make big plays downfield.

Jaylon Smith versus Nick O’Leary:  Irish standout Jaylon Smith will have many responsibilities versus the Seminoles but one of the most important will be stopping Nick O’Leary.  O’Leary is the second-leading receiver for the Seminoles and is a security blanket at the tight-end position.  Smith is very solid in coverage as a linebacker and can make a play when Winston looks for O’Leary on third down and in the red zone as the Heisman trophy winner tends to force the ball to his tight-end.

The Irish running backs versus Reggie Northrup:  One way for the Irish to slow down the Seminoles offense is through controlling time of possession with the run game.  Tarean Folston made his claim for more touches last week but all three Irish backs will need to chip in and have good performances.  Linebacker Reggie Northrup is tied for the Seminole lead in tackles and also has a touchdown on a fumble recovery this season.  Northrup is one of the many NFL talents on the Seminole defense that is stout against the run.

Will Fuller versus P.J. Williams:  Sophomore receiver Will Fuller will face his toughest test of the season against All-American cornerback P.J. Williams.  Fuller has done an excellent job replacing DaVaris Daniels as the Irish’s number one receiver having many big games against inferior opponents, but he will need to rise to the occasion when matched up with Williams.  The junior Williams is a ball-hawking corner with a team-high six pass defenses as well as an interception and fumble recovery for the Seminoles this season.  The Irish could benefit from using Fuller in the screen game to help him be effective.