Notre Dame Injury Updates Out of the Bye 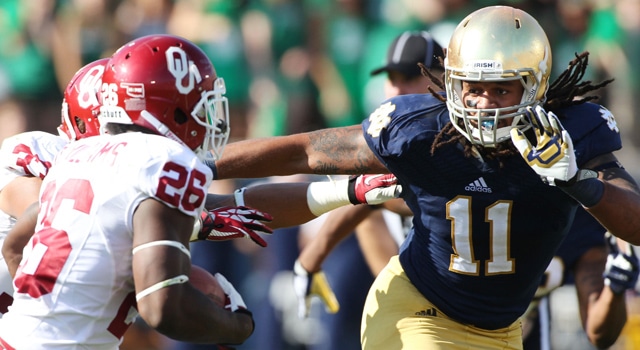 Notre Dame used its late season bye week to rest last week – literally.  Notre Dame didn’t practice last week because of all of the mounting injuries the Irish have dealt with in 2013 – specifically on the defensive side of the ball.  With a full week of rest under their belts, Brian Kelly wasn’t ready to rule anyone out for this weekend’s game with BYU.

No.  There’s nobody at this point that’s definitely out,” Kelly said on Tuesday.  “I think everybody is at this point where their focus is to get out there and give it the best shot to play against BYU,” he added.

With the full week off, Kelly utilized Monday for a rare, full practice session – something he and the staff normally coming off a normal Saturday game.  They did so this week in order to get an early handle on the injury status of the walking wounded on defense.

Kelly later specifically addressed the status of some of those defensive players who have been banged up.

If Notre Dame has Schwenke, Jones, and Rochell on the field to go along with Louis Nix, Sheldon Day, and Stephon Tuitt, the defensive line should be in the best shape we’ve seen it in since the beginning of the season.  That depth of front will be needed this weekend with a tough, hard-nosed opponent in BYU who will be coming to town upset minded after the Irish narrowing escape the upset last year in South Bend.