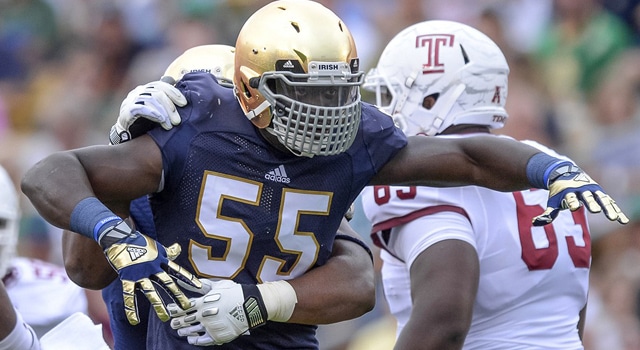 Notre Dame will return to South Bend this weekend for a pivotal early season challenge versus Michigan State.  The Spartans always play the Irish tough and are seeing their form improve each week ahead of this Saturday`s game.  The Irish have had trouble displaying the form they showed last season, especially on defense.  The Spartans bring a physical team to Notre Dame Stadium that will be looking to start to experience consistency on offense.  The Irish will need to improve their form on defense and control the line of scrimmage in order to move to 3-1 and start to earn back the respect of the rest of the nation.  The following are the key matchups the Irish must control in order to be successful versus the Spartans:

Irish running backs versus Max Bullough:  The stable of Irish running backs will be in need of their best game of the season against Michigan State.  The Spartans are extremely physical and stout against the run so the Irish will need Cam McDaniel to continue to earn the hard yards between the tackles as he did versus Purdue.  Amir Carlisle and George Atkinson III will also need to run downhill and secure the football while also making the most of opportunities to get to the edge.  Freshman Greg Bryant and Tarean Folston will also need to justify the hype surrounding them if they receive a chance to carry the ball.  The catalyst of the Spartans hardnosed defense is linebacker Max Bullough.  Bullough, a preseason second team All-American is in his third season as the Spartans starting middle linebacker and has led his team in tackles each of the last two seasons.  Bullough has 15 tackles so far this season and will attempt to continue Notre Dame’s struggles running the ball.

Ronnie Stanley versus Shilique Calhoun:  First year starter Ronnie Stanley is in for a very stiff challenge against pass-rusher Shilique Calhoun.  Stanley has played decent at right tackle for the Irish this season but hasn’t been exceptionally good run blocking and also hasn’t seen a pass-rushing talent like Calhoun.  Calhoun is off to a great start for the Spartans with three tackles for loss, two sacks, an interception, eight quarterback hurries and three fumble recoveries.  When the Irish are in obvious passing downs Calhoun will pin his ears back and come after Tommy Rees, who lacks the ability to escape the rush, so it is paramount that Stanley provide Rees with enough time to make plays downfield.

Dan Fox versus Jeremy Langford:  Dan Fox will be once again charged with the responsibility of holding the opposition’s number one running back in check.  Fox leads the Irish in tackles with 24 and has been steady against the run and pass this season.  The Spartans also have a stable of backs to which they give the ball, chief among them being Jeremy Langford.  Langford is experiencing his first season as a starter and leads the team with 200 yards rushing and four rushing touchdowns and is also third on the team with seven receptions.  A well rounded back like Langford is pivotal to the success of the Spartans offense as he gets many touches.  All of Fox’s skill will be tested by an all-around back but if he can shut down Langford he can help make the Spartans one dimensional and therefore hurt their offenses ability to make plays.

Prince Shembo versus Connor Cook:  Notre Dame’s edge rusher Prince Shembo is going to need a big game versus the Spartans and will be the key to shutting down Spartans quarterback Connor Cook.  Shembo has 10 tackles and six quarterback hurries so far this season and will need to get to Cook when he drops back to pass as well as contain the mobile quarterback when he scrambles and on designed runs.  Cook took the starting quarterback job away from week one starter Andrew Maxwell and has established a firm hold on it.  Cook has thrown four touchdowns and no interceptions this season and has also run for 70 yards.  Cook can escape the rush and make plays on the run so Shembo must throw off his timing through pressure  while also limiting the damage the Spartans quarterback does on the ground.