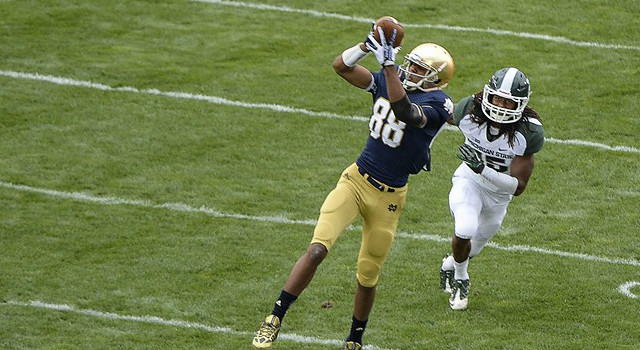 It wasn’t pretty but the Irish managed to get to 3-1 on the season with a 17-13 victory over Michigan State.  Both teams played sloppy but the Irish were able to take advantage of costly penalties by Michigan State and missed opportunities by the Spartans in order to get the win.  Notre Dame’s defense stepped up but the offense continued to struggle, particularly in the ground game.  The Irish will need to clean up their mistakes this week as the undefeated Oklahoma Sooners come to town next weekend.  The following players were the catalysts in leading the Irish to their tenth straight home win:

In a low scoring defensive battle field position is key, Kyle Brindza made sure Notre Dame had the advantage in that stage of the game when it mattered most.  Brindza hit back to back punts of over 50 yards in the closing stages of the fourth quarter to force the Spartans to have to drive the majority of the field against the Irish defense.  Brindza also connected on a 41 yard field goal and was strong on kickoffs as the Spartans were limited in the damage they could do in the return game.

Freshman wide receiver Corey Robinson picked a good time to play his best game of the season so far.  The Irish were struggling to move the ball but Robinson made multiple first down catches on third down to keep drives alive and looked to be a matchup nightmare for every Spartan corner due to his size.  Robinson also drew some crucial pass interference penalties as he was too much to handle in man to man coverage.  The Texas native totalled three receptions for 54 yards in the Irish victory.

Irish nose guard Louis Nix embraced the battle in the trenches that would decide the game and was instrumental in Notre Dame’s defense winning it.  Nix had six tackles and a pass breakup while he ate up double teams and took away the middle of the line of scrimmage from the Spartans.  The Irish All-American talent was very disruptive to the Spartans offense and his presence allowed Stephon Tuitt to play his best game of the season.

Coming off a couple lackluster performances Irish corner KeiVarae Russell stepped up against the Spartans.  Russell was solid in man to man coverage, an area where he had been victimized recently.  He also tackled well, which had been a concern for the Irish secondary in previous weeks.  Russell had four tackles and a team leading three pass breakups in the victory.