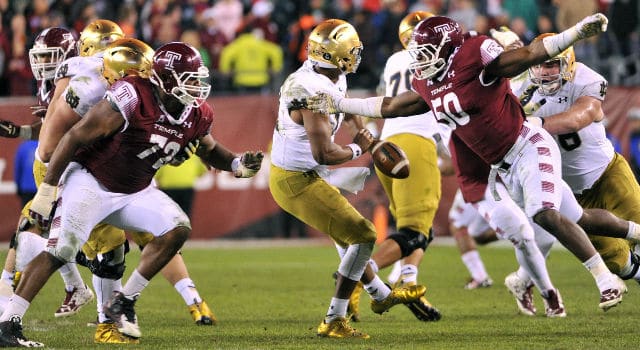 Each football season brings with it a new identity for every team.  Ohio State, the defending national champions, had the luxury of three quarterbacks capable of starting for seemingly any program in the country last season.  Fast-forward several months and the Buckeyes have been plagued by inefficiency at what appeared to be a position of strength with the very same players.

For Notre Dame, two-thirds of the way through the 2015 season, the identity is one of inconsistency that has surfaced on a nearly weekly basis.

Head coach Brian Kelly’s team jumped to a 14-0 lead over Massachusetts in what was expected to be a route.  And although a blowout ultimately occurred, it only took place after Notre Dame let its guard down and allowed the Minutemen back into the game.

Notre Dame’s lead was cut to seven when UMass’s true freshman running back Marquis Young cut through the Irish defense for an 83-yard touchdown.  On the very next play quarterback DeShone Kizer was intercepted when wide receiver Will Fuller attempted to catch a pass with his body, a mental error wide receivers coach Mike Denbrock has hammered home to Fuller time and again.  Kizer’s interception spurred a 10-play, 50-yard drive for a touchdown that made a surefire blowout a legitimate contest.  And while Notre Dame would pull away in the second half and score 62 points – the most since 1996 – the sloppiness witnessed in the first half has followed Notre Dame throughout its fall schedule.

The Fighting Irish letting up too soon nearly cost them against the USC Trojans.  Notre Dame quickly jumped to a 21-10 lead against its bitter rival sparked by DeShone Kizer connecting with Will Fuller for a 75-yard touchdown on the offense’s very first snap, and a subsequent blocked punt for a touchdown.  Kizer commanded the Irish offense on a 63-yard drive to the USC one-yard line, with a touchdown likely breaking the will of the Trojans.  Instead, Notre Dame fumbled at the goal line, and what should have been a back-breaking play put USC right back into the ballgame.  In only three offensive snaps the Trojans were able to gain 159 yards and managed to tie the score heading into halftime.

But Notre Dame’s inconsistency goes beyond simply letting opponents back into games – the Irish are failing to show up prior to the fourth quarter in marquee matchups.  Notre Dame’s offense stalled and endured multiple miscues in the red zone against the No. 21 Temple Owls until Temple took a 20-17 lead with less than five minutes remaining in the game.  Despite being limited to 24 yards on its last two offensive drives, Notre Dame’s offense moved the ball with relative ease on the last possession of the game.  Kizer hit Fuller for a clutch third down conversion only to connect with Aliz’e Jones for 45-yards on the next play before ultimately finding Fuller in the end zone for the game-winning touchdown.

Notre Dame’s inability to play consistently ultimately led to their only defeat of the season against Clemson.  Kelly’s team played its best football of the year in the fourth quarter in Death Valley, holding the Tigers to 18 yards on three offensive drives, including two forced turnovers.  Notre Dame’s offense was also at its best, scoring touchdowns on a 4-play, 64-yard drive and a 6-play, 32-yard drive.  But the sloppiness of the previous three quarters built too large of a deficit to overcome.

The impressive part, despite the sole blemish against Clemson, is Notre Dame continues to find ways to win despite its inability to play well for a full four quarters, something the Irish were incapable of doing prior to Brian Kelly’s arrival.  Kelly routinely discussed the importance of teaching players how to win when he first arrived in South Bend in December of 2009, and since that point no other program in the nation has had as many fourth quarter comeback victories as Notre Dame.  But in order to take that next step to elite status, Notre Dame has to evolve beyond making clutch plays when it matters most and begin to play complete games.

The 6-2 Pittsburgh Panthers pose yet another significant test for Notre Dame.  Head coach Pat Narduzzi, the longtime defensive coordinator of the Michigan State Spartans, oversees a stiff defensive unit that will test a Notre Dame offense that struggled throughout most of Saturday evening’s contest against Temple.

DeShone Kizer has displayed poise beyond his years and is developing a reputation as a clutch performer, but if Notre Dame wishes to make the College Football Playoff cut, the fourth quarter heroics need to become a thing of the past.

Scott Janssen is a blogger for the Huffington Post and has authored several nationally-featured articles, including an appearance on MSNBC as a sports contributor.  He talks football 24 hours a day, much to the chagrin of his wife and those around him.  Scott can be reached at scottjanssenhp@gmail.com.