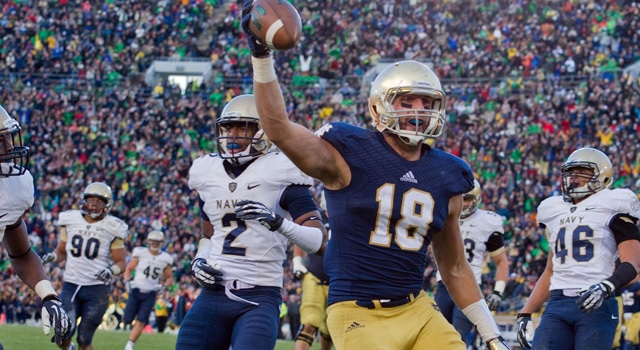 Notre Dame improved to 7-2 on the season with a much too close for comfortable victory over the Navy Midshipmen.  The Notre Dame defense was carved up for over 300 yards by the Navy ground game, but in the end came up with a stop to hang on for the victory.

There was a lot to be concerned with for Notre Dame’s chances down the stretch, but lost in the mix were several bright spots as well.  We’ll get into the negatives a little later, but for now, here are the 5 things I liked from yesterday’s win.

Lost in the angst over how poorly the Notre Dame defense played was how well Notre Dame ran the football yesterday.  The Irish mashed out 264 yards on the ground led by freshman Tarean Folston’s career high 140 yards.  Folston, Cam McDaniel, and George Atkinson all had great games for the Irish yesterday with McDaniel adding 52 yards and Atkinson adding 74 while all three Irish backs found the endzone against the Midshipmen.

The Notre Dame offensive line and tight ends – especially Troy Niklas – played a huge role in the Notre Dame running game having its best game of the season with the Irish line opening huge lanes for the backs even with two backups starting with Christian Lombard lost for the season and Chris Watt being a late scratch.  Freshman Steve Elmer and junior Connor Hanratty filling in admirably.

Folston’s performance should push him to the top of the Notre Dame depth chart for the rest of the season not just because of his stats, but because of the way he ran.  Folston ran with the type of power and authority that no other Irish back has shown this year.  When Folston runs, he always falls forward.  When some other Irish backs run, they fly backwards on contact.  We will be talking more about Tarean Folston this week, but if there was any doubt who the best back on the roster is right now, there shouldn’t be any longer.

I’ve already mentioned the play of Steve Elmer and Tarean Folston, but they weren’t the only freshmen to play well yesterday.  Isaac Rochell was called upon to play a larger role with the injuries up front.  Cole Luke and Devin Butler have firmly entrenched themselves in the rotation in the secondary.  Max Redfield was a force on special teams.  And Jaylon Smith started his 9th game of the season.

Elmer and Smith will be starters for the rest of the season and unless the coaching wasn’t watching yesterday, Folston should be too.  That’s three impact starters from a freshman class.  You can’t ask for much more than that.  Add in the contributions of Luke, Butler, Rochell, Redfield, James Onwualu, Corey Robinson, and Will Fuller and this freshmen class might just be the best freshmen class to come through Notre Dame in a long, long time.

It might be tough to really appreciate right now since right now the Irish are coming off of a 4 point win over a Navy team that scored 7 points against Duke, but this class has the potential to be very special and fuel another championship run at some point in their careers.

The Notre Dame defense had its worst performance since the 2010 Navy debacle in the Meadowlands.  There is no other way to say and no point in sugar coating.  The defense was just atrocious yesterday, but that doesn’t mean that there aren’t some positives to take from it.  One positive was the play of Ben Councell before his injury and Eliar Hardy – two players many Notre Dame fans had written off at this point.

Councell was passed on the depth chart by Jaylon Smith, but yesterday was one of the best performances we’ve seen out of Councell in his career.  Councell had 5 tackles, a tackle for loss, and a pass breakup before suffering what looked like a serious injury.  There isn’t more news on Councell’s injury right now but it looked like when he planted his leg it got caught in the turf and those type of injuries are usually not minor.

Hardy meanwhile saved the game for Notre Dame when he wasn’t fooled by Navy’s inexplicable reverse on 4th down with the game on the line.  If Hardy doesn’t hold contain or allows himself to be blocked there, Navy could have scored on the play and at the very least would have gotten the first down.  Hardy, however, remained disciplined and forced the play wide allowing Jaylon Smith to clean up.

Both players may have been forgotten by Notre Dame fans but both are showing that they are going to be factors for the Irish.

It was really unfortunate that depth chart problems forced Schwenke into action in both 2010 and 2011 when a redshirt year would have greatly benefited him.  With the way Schwenke is playing right now, having another year of eligibility for him to start next year would just be huge for Notre Dame.  Unfortunately that redshirt had to be burned both years and he won’t have that chance.

Another big game from TJ Jones and Touchdown Koyack

TJ Jones scored a touchdown for the 6th straight game yesterday and racked up over 100 yards receiving in the first half alone before Notre Dame realized it could just run on every down and not be stopped by the Navy defense.  Jones’s big game gave him a career high in receiving yards in a single season with 742 while being just two receptions short of tying his single season personal best as well.  Jones has become an all around receiver for the Irish and has the chance to top 1,000 yards and 10 touchdowns this year at his current pace. Jones has scored a touchdown in all but the Temple and Purdue games – the two games in which Davaris Daniels has scored his only touchdowns of the season.

Seeing Ben Koyack have an impact after also being largely overlooked and forgotten by many fans – like Councell and Hardy – was great to see as well.  Koyack only has five catches this season, but three of them have went for touchdowns giving Notre Dame a viable receiving threat in two tight end sets.