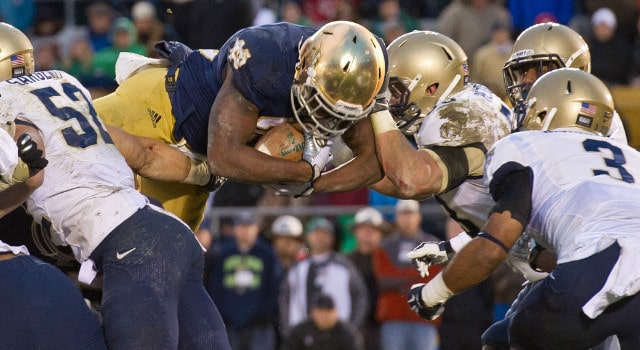 It was far closer than it should have been but the Irish pulled out their fourth straight victory with a 38-34 triumph over Navy. The Midshipmen’s option attack gave the Irish massive problems as Navy could move the ball at will. The Irish offense made some mistakes but luckily was able to do just enough to bail out the defense. The following players stepped up for the shorthanded Irish in their seventh win of the season:

Freshman running back Tarean Folston finally got the lion’s share of the carries for the Irish and should exactly what he can do. Folston showed he is an elite combo of vision, speed, and power that no other Irish running back possesses. Folston carried the ball 18 times for 140 yards and a touchdown, his first score and 100 yard game for the Irish. The Florida native should continue to get the majority of the carries as he has shown what he can do when he’s allowed to get in a rhythm.

Defensive lineman Kona Schwenke has been forced into action due to injuries on many occasions this season and came up with his best game this week. The native of Hawaii tallied a team-high 11 tackles and would have had more if he didn’t go down to injury in the second half. Schwenke did an excellent job of battling cut blocks and slowing Navy down in the trenches when they ran up the middle with their fullbacks.

Irish tight-end Troy Niklas didn’t have his biggest day catching the ball with two receptions for 44 yards but he was instrumental to the team’s victory. Niklas was a prime example of the physical advantage the Irish possessed over Navy. The California native was a monster in the run blocking game routinely driving his man over ten yards downfield. Niklas was instrumental in the success of the Irish run game that totalled 264 yards.

Irish receiver T.J. Jones continues to rack up numbers as Tommy Rees’s favorite target. Jones had four receptions for 111 yards and a touchdown versus Navy. Jones could not be covered by the Navy corners and would have had massive numbers if it wasn’t for some poor throws in his direction from Rees as well as the change to a more run heavy attack.