A New Notre Dame Offense or One Game Wonder? 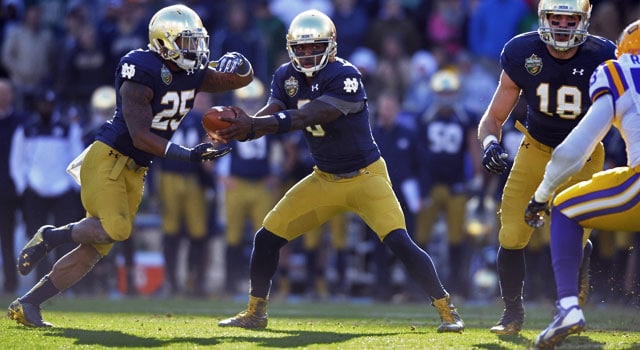 Notre Dame Fighting Irish quarterback Malik Zaire (8) hands the ball off to running back Tarean Folston (25) during the first half against the LSU Tigers in the Music City Bowl at LP Field. Mandatory Credit: Christopher Hanewinckel-USA TODAY Sports

Notre Dame ran the football 51 times against LSU in the Music City Bowl earlier this week – tied for the most attempts during the five year Brian Kelly era – and the result was 263 yards of offense against the SEC’s top ranked defense.  Prior to Tuesday the Irish attempted even 40 rushing attempts just four times this season.  Was Tuesday a preview of things to come for the Irish offense or a one hit wonder like we’ve seen in the past?

While Notre Dame hasn’t attempted 50 rushing attempts in any game this season other than the Music City Bowl, they have run the ball that many times twice during Kelly’s tenure – both in 2012 (Pitt and Miami).  Notre Dame won both of those games and is now 3-0 when they run the football 50 or more times under Kelly.  In fact, Notre Dame is 17-1 in games when the run the ball 40 times or more.

The main reason to uptake in rushing attempts was a heavy dose of quarterback runs out of the zone read from first time starter Malik Zaire.  The sophomore quarterback ran the ball 22 times on Tuesday for a team high 96 yards.  The previous season high in rushing attempts for Everett Golson was 16 in 12 regular season starts – 7 of those attempts however were actually Arizona State sacks.

With the success of the two quarterback, run heavy offensive game plan on Tuesday should Notre Dame fans expect to see more of the same in 2015?  Brian Kelly was noncommittal following the game.

“Part of playing Malik (Zaire) and starting him was to try and find out how we were going to utilize him in the game and how to construct playing two quarterbacks,” Kelly said .  “I think we can move forward and begin looking at that and how we can construct that.”

With the success of playing both and the success the Irish saw on the ground after struggling to run the football so often this year, Kelly and his staff will likely be spending most of the offense doing just that – rethinking the pass heavy offense Notre Dame employed most of the 2014 season.

Moving towards a run first offense would not be completely foreign to Kelly at Notre Dame.  Despite a rather pass happy offense the last two seasons, the Irish ran the ball effectively and with regularity during tis run to the national championship game in 2012.  Seven of the 18 games in which Notre Dame attempted 40+ runs during the Kelly Era came during that 2012 season.

Figuring out the identity of the Irish offense moving forward is only part of the equation for Kelly and staff this off-season though.  They will once again need to figure out who their starting quarterback will be on top of figuring out if they want to even just stick with one quarterback or use a system similar to what they did against LSU.

Kelly’s game plan for LSU was without question masterful.  Kelly took an offense that couldn’t protect the football or run the ball against solid defenses and devised a game plan that utilize both quarterbacks skills and kept LSU on its heels while racking up those 263 yards.

With a full game tape to study though will such an approach work in 2015?  Notre Dame also used two quarterbacks regularly in 2012 with Tommy Rees playing the role of closer during Golson’s first year as a starter.  Kelly did not, however, change quarterbacks in 2012 as often as he did on Tuesday though.  There were times when Kelly would shuffle his quarterbacks multiple times in a single drive with the game winning drive being a prime example.

“It went back to just a feeling of what I believed that they execute in a very crucial situation of the game,” Kelly said of the final drive. “That’s how I called the game in the last series, really trying to fit into what I believed were the plays they would feel comfortable with.”

With the Music City Bowl out of the way and the Irish coming out on a winning note to cap off what was a disappointing season. Kelly and his staff will now turn their attention to what their plan will be long term for the quarterback position.  “This really was just about this game. Playing bother of them and my focus was about winning this game and we’ll figure out the quarterback situation in January,” Kelly said.

Whatever Kelly and his staff decide for the future, the results from Tuesday can’t be argued.  Notre Dame ran for more yards on LSU than all but Auburn, Mississippi State, and Wisconsin.  The Irish only ran for more yards in any single game this season in the season opener against Rice.  Last year the only game in which the Irish topped their 263 yards from earlier this week was against Navy.

In looking at the personnel the Irish will have back in 2015, Notre Dame really can go either way here.  If Ronnie Stanley returns for his senior season, the offensive line will return all five starting linemen from the Music City Bowl.  The Irish wide receivers will be among the best in the nation with Will Fuller, Corey Robinson, Chris Brown, and CJ Prosise being potentially bolstered by Davaris Daniels should he be reinstated in addition to the youngsters on the roster and enrolling next year.

With all of that fire power, Notre Dame should be able to pick its poison.  Complicating matters somewhat, however, will be a potential lack of depth at running back.  As of now, the only scholarship running backs on the roster for next year are Tarean Folston and Greg Bryant.  Notre Dame does have Josh Adams committed and on schedule to sign his letter of intent next month and have been leaving no stone unturned in their pursuit of a second running back in this class but even if the Irish add two backs that is not exactly a well stocked backfield experience wise.

No one knows what the 2015 Notre Dame offense is going to look like – not even Brian Kelly and his offensive staff.  If what we saw on Tuesday, however, was a glimpse into the future, there stands to be a good chance that on January 1 of next year we’ll all be busy firing up our tailgates and not discussing next season already.