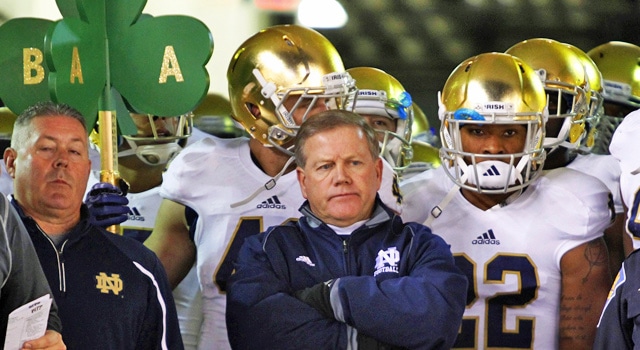 Notre Dame QB’s: Tommy Rees heads into the final game of his Notre Dame career with 2,938 passing yards on a 53.7 completion percentage with 27 passing touchdowns and 13 interceptions. His 27 touchdown passes are the most since Jimmy Clausen had 28 in the 2009 Notre Dame Football season. Andrew Hendrix enters what will likely be his final game in a Notre Dame uniform as rumors circulate that he is likely to transfer to Miami to be with new head coach (and former Notre Dame offensive coordinator) Chuck Martin. Hendrix has completed 2 of 14 passes for a 14.3 completion percentage and 56 passing yards along with 26 rushing yards and 1 rushing touchdown.

Notre Dame QB’s vs. Rutgers Pass Defense: Rutgers has the 122nd ranked pass defense that is the worst ranked pass defense that the Irish will face since the season opener against Temple (who is ranked 121st in the nation). Rutgers has allowed opponents to complete 64.1 percent of their passes and have allowed 31 passing touchdowns and have only intercepted 8 passes all season long with 311.4 passing yards allowed per game. Rutgers has allowed 400 or more passing yards in 4 games this season as well with 456 allowed against Fresno St., 484 allowed against SMU, 400 to Houston, and the highest being 507 to Cincinnati. Rutgers also had 4 other games where at at least 300 passing yards were allowed as well to give them 8 games overall with 300 or more passing yards allowed. Opponents were also accurate in these games as well with 4 games having opponents complete 70 percent or higher of their passes as well. This gives the Irish a lopsided matchup that could give Tommy Rees the best performance of the season in the passing game.

Rutgers QB’s vs. Notre Dame Pass Defense: The Irish come in with the 18th ranked pass defense that has allowed opponents to complete 60.7 percent of their passes and have allowed 18 passing touchdowns and have 9 interceptions. While the defensive secondary for the Irish hasn’t been as good as they were in the 2012 season, the unit has done a decent job and only allowed 1 opponent to exceed 300 or more passing yards (Arizona St.). While the quarterback change for Rutgers might have helped considering Gary Nova having major turnover issues (He has thrown for 39 interceptions in his career in total over three seasons with 9 in 2011, 16 in 2012, and 14 this season), Chas Dodd still has more interceptions than touchdowns. The Irish should be able to do well against the Rutgers pass offense.

Notre Dame RB’s vs. Rutgers Rush Defense: Rutgers is 4th in the nation in rush defense with 94.6 yards per game allowed and has held opponents to just 3.0 yards per rush, but they have allowed 15 rushing touchdowns this season. They did allow one opponent to rush for 211 yards which was a season high in yards allowed in the loss to Houston, and UCF was able to find the endzone easily on the ground with 4 rushing touchdowns. Rutgers is the third team this season that Notre Dame will face with a top 5 run defense with opponents Michigan St. and Stanford being 1st and 3rd, respectively. The Irish will likely stick to the main rotation of Cam McDaniel, Tarean Folston, and George Atkinson III, but look for Folston to continue to see more playing time.

Rutgers RB’s vs. Notre Dame Rush Defense: The Irish are 76th in run defense and have numerous injuries up front on the defensive line and are without Louis Nix III since he is out for the season and has declared for the NFL Draft. In the four games Louis Nix III missed this season (Air Force, Navy, BYU, and Stanford), the Irish allowed more than 200 rushing yards each time, and have allowed 200 or more yards in 5 games this season. Rutgers has just the 98th ranked rush offense and the Irish should improve upon poor performances by the run defense after allowing back-to-back 200 or more yard games.

Notre Dame WR’s vs. Rutgers DB’s: With the Rutgers pass defense being as low as it is in terms of ranking, and numerous playmakers in the receiving game for the Irish gives a major matchup nightmare here. Having 7 players with a long of 30 or more yards and 5 with 40 or more yards matches up well with a unit that has allowed 33 plays that were 25 or more yards and 90 plays of 15 or more yards. With numerous players capable of catching long passes and having done it more than one occasion this season gives the Irish more edge.

Rutgers WR’s vs. Notre Dame DB’s: The Scarlet Knights have shown that they can spread the ball around as well with the top 4 receivers being close in terms of receiving yards. Leonte Carroo needs to be accounted for as he basically has a receiving touchdown every 3 receptions. The top 5 all are capable of catching longer passes with all 5 having a long reception of 40 or more yards and 6 players overall have a reception of 40 or more yards this season. Preventing the big play is going to be important as always and the Notre Dame secondary will have a boost with the return of Elijah Shumate and Eilar Hardy returning after missing the Stanford game.

Notre Dame OL: The Irish will be without Chris Watt for the Pinstripe Bowl due to injury and will be the third starting offensive lineman lost for the season this season. Despite this, the offensive line has been one of the best units for the Irish this season. Opponents have had a tough time getting to Tommy Rees with only 8 sacks allowed all season and have allowed 22 quarterback hurries and 50 tackles for loss. In terms of run blocking, the Irish average 4.5 yards per rush and 149.0 rushing yards per game.

Notre Dame OL vs. Rutgers DL: Rutgers has been decent in getting in sacks with 32 overall and they have 25 quarterback hurries and 76 tackles for loss. With Rutgers being good at getting into opposing backfields with the 76 tackles for loss, the Irish will need to keep that contained. Despite being down a few starters, the Irish have been able to do well despite losing players for the season and the offensive line should put in a good performance for the Irish.

Rutgers OL: The Scarlet Knights came into this season with tremendous amounts of returning experience, but have had trouble keeping opponents out of the backfield this season with 31 sacks, 76 tackles for loss, and 30 quarterback hurries allowed. Run blocking hasn’t been as great with an average of 133.7 rushing yards per game and 3.7 yards per rush, but the unit has blocked decently with 17 rushing touchdowns.

Notre Dame DL: Out of all the units on the entire Notre Dame Football team, this one has suffered more injuries than the rest. Tony Springmann and Chase Hounshell were lost for the season before it even began and numerous others had injuries that forced them to miss time as well, and Louis Nix III missed time before eventually having season-ending surgery and declared for the NFL Draft. Stephon Tuitt has 45 tackles, 7.5 tackles for loss, 6 sacks, 1 interception (returned for a touchdown), 2 pass breakups, 13 quarterback hurries, and 1 forced fumble. Sheldon Day has 31 tackles, 5 tackles for loss, 1 pass breakup, and 1 quarterback hurry, while Kona Schwenke has 21 tackles and 1 quarterback hurry. Jarron Jones continues to see more playing time and has 18 tackles, 1 quarterback hurry, 1 forced fumble and 2 blocked kicks, while Issac Rochell has 10 tackles.

Notre Dame DL vs. Rutgers OL: Rutgers has had problems keeping opposing teams out of their backfield and have had issues with quarterback pressure. This plays well into the strength the Irish have in pressuring opposing quarterbacks. Considering all of this, despite being down in injuries, the Irish will be able to make plays.

Rutgers DL vs. Notre Dame OL: The Irish may be down a few players on the offensive line and Rutgers can get into the backfield with sacks and tackles for loss, and this is an area that needs to be focused on. The Irish have done well in bringing in the next player when one goes down, and having backups being prepared has been a major bonus in one of the best units for the Irish. Keeping Rutgers out of the backfield is going to be one of the biggest battles in this game.

Notre Dame LB’s vs. Rutgers: Run support and pass rush will be important for the linebackers, while also covering tight end (and leading receiver) Tyler Kroft. Look for Jaylon Smith to continue to make plays and Prince Shembo to bring in quarterback pressure. The Irish will need strong play from the linebackers with injuries depleting up front on the defensive line.

Rutgers LB’s vs. Notre Dame: The linebackers help make for a strong front seven for the Scarlet Knights. Considering the high ranking of the run defense of Rutgers, this will make it a bit of a challenge in running the ball. Rutgers will need to account for the tight ends of Notre Dame as well as they have made quite a few plays this season as well. Keeping the linebackers out of the backfield is also important as well with many having numerous tackles for loss.

Notre Dame DB’s vs. Rutgers WR’s: Preventing the big play is going to be very important with quite a few players for the Scarlet Knights being able to catch long passes. Rutgers can spread the ball well too which also must be accounted for. The defensive backs are going to be back to full strength for the Pinstripe Bowl and this helps in the matchup here.

Rutgers DB’s vs. Notre Dame WR’s: The secondary for Rutgers has been one of the worst units in the nation when it comes to defending the pass. With the Irish coming in with a talented group of receivers that all are capable of having big games and catching long passes will make for a major challenge for the Scarlet Knights secondary. This is a perfect game for Notre Dame to continue using the true freshmen in addition to TJ Jones, DaVaris Daniels and Chris Brown.

Everything Else: The Irish are coming off a close loss at Stanford to give the Irish a regular season finish of 8-4, while Rutgers beat USF to finish 6-6 and become bowl eligible. Despite losing offensive and defensive coordinators Chuck Martin and Bob Diaco to Miami and Uconn as head coaches, the Irish should still be fine as Rutgers fired a few members on the coaching staff. The Irish should try to stay balanced on offense, but with Rutgers having a major weakness in pass defense, this looks like a great opportunity for making plays in the air. Injuries have mounted this season for the Irish, and especially on the defensive line and getting out of the bowl game injury free will help as well and the playing time for the backups has proven to valuable along with the additional practices that going to a bowl game offers. Winning this bowl game would help give the Irish a more positive shift in momentum going into the 2014 season that will feature the return of Everett Golson at quarterback.