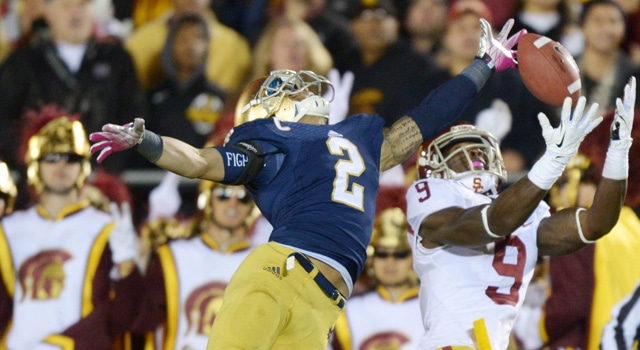 Notre Dame struggled mightily last week but survived against Navy and kept their BCS hopes alive.  The Irish are done with facing the option offense which is good for the defense as they can get back to normal assignments.  The offense will have more difficulty putting up points as they’ll be facing division one athletes again.  Notre Dame will go into its primetime showdown with Pitt shorthanded due to injuries, so the following players must step up and dominate their matchups for the Irish to have success.

Irish corner Bennett Jackson is probably itching to get back into the swing of things in pass coverage on the outside, and he’ll have quite the challenge in freshman standout Tyler Boyd.  Boyd has a team-high 45 receptions and six receiving touchdowns to go along with 644 receiving yards.  Boyd has good speed so Jackson must be cautious not to get beat deep.  If Jackson can handle Boyd it will put particular stress on Pitt quarterback Tom Savage to target dependable receiver Devin Street.

Notre Dame sophomore KeiVarae Russell will be in charge of shutting down the second half of Pitt’s two-headed monster at wide receiver, the dependable Devin Street.  Russell looked solid tackling and fighting off blocks against the option, which he will need to continue to do, but the corner will need to be strong in pass coverage against Street.  Street is a talented senior who leads the Panthers in receiving yards this season with 690.  Street is a very dependable route runner and possession receiver but his speed can’t be underestimated or he will exploit the coverage and make big plays downfield.

[Related: Pitt’s JP Holtz doesn’t like Notre Dame At All]

First-year starter Nick Martin has faced some stiff challenges this season and is in for another one versus the wrecking-ball that is Aaron Donald.  Martin has improved as the season has gone on making less mistakes each game and has reacted well to having to play with backups at both guard positions at times this season.  He will have his hands full with Donald though.  Donald has nine sacks this season for the Panthers and has also forced three fumbles, both team-highs.  Donald isn’t the biggest defensive tackle at 285 pounds, but he has a great motor and the fact he is relentless will be the hardest thing for Martin to deal with.

Number one receiver T.J. Jones continues to put up numbers week after week for the Irish and will look to do so again versus Pitt.  Jones is leading the Irish in virtually every receiving category and is by far Tommy Rees’s favorite target.  Lafayette Pitts will be charged with shutting down Jones.  Pitts played well against Notre Dame last season and will look to do it again on his home field in primetime.  Pitts is a physical corner and will look to knock Jones off his routes and make Rees throw into tight coverage and make mistakes when looking for Jones in key situations.