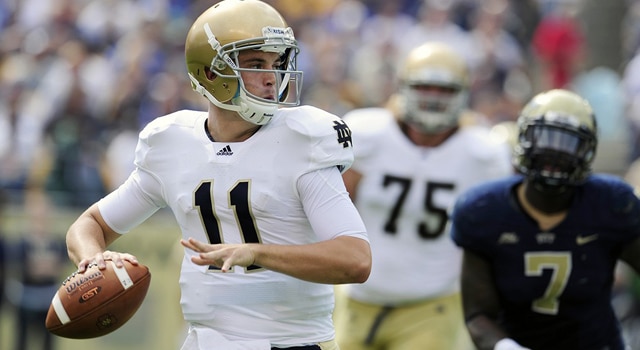 Tommy Rees (11) rolls out of the pocket under pressure from Pittsburgh Panthers linebacker Brandon Lindsey (7) during the second half in the Notre Dame Fighting Irish 15-12 victory against the Pittsburgh Panthers at Heinz Field in PIttsburgh, Pennsylvania. (Photo: Jeanine Leech/Icon SMI)

The kickoff time for the Notre Dame – Pitt game this coming weekend at Heiz Field in PIttsburgh has finally been announced by ABC.  The Fighting Irish and Panthers will kickoff in primetime Saturday night at 8:00 PM ET – Notre Dame’s 5th primetime contest of the season.

The game will be nationally televised on ABC as the 8:00 prime time ABC telecast.

Notre Dame previously faced Michigan, Purdue, Arizona State, and USC in primetime this season.  Notre Dame is 3-1 in those games and 1-1 on the road with a win over Purdue and loss to Michigan earlier this season.

Notre Dame and Pitt played in primetime in Pittsburgh in 2005 and 2009 most recently.  PItt took the Irish down in Charlie Weis’s final season in South Bend after Weis first team stormed the Panthers in Prime Time in 2005.

Notre Dame’s last trip to Pittsburgh came two seasons ago in 2011.  That game wasn’t a prime time match up with kickoff a rare noon start for the Irish.  The ensuing game lived up to the hype of a noon kickoff too with the Irish sleepwalking their way to a 15-12 victory over the Panthers for their second win of the 2011 season.  Tommy Rees had a fairly pedestrian game on that late September afternoon completing 24 of 41 for 216 yards with a touchdown and an interception.  Rees lone touchdown that day did prove to be the game winner though.  Even still, Notre Dame fans will be hoping for a much better trip to Ketchup Field this time around for Rees after he tossed two interceptions against Navy this past weekend.

For Pitt, the Panthers will be looking for some revenge after Notre Dame snuck away from Notre Dame Stadium with a double overtime win to keep their perfect regular season intact.  The Irish were fortunate to walk away with the victory last year after it was reported that Notre Dame had two players on the field with the same number on Pitt’s missed field goal in the first overtime.