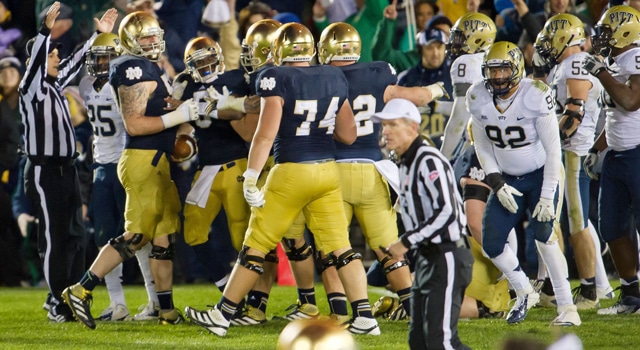 Notre Dame QB’s: Tommy Rees is getting closer and closer to a high finish in some all-time records for Notre Dame. He could potentially finish in the top 3 in career passing yards and is in the top 3 already in touchdown passes. On the season he has completed 55.6 percent of his passes for 2,186 passing yards along with 22 touchdowns and 8 interceptions. Andrew Hendrix has appeared in most of the games this season and had completed 2 of 14 passes (14.3 completion percent) for 56 yards, and also has 26 rushing yards and 1 rushing touchdown this season.

Notre Dame QB’s vs. Pittsburgh Pass Defense: Pittsburgh is ranked 18th in the nation in pass defense and is allowing 202.0 yards per game in 8 games overall. They are allowing opponents to complete just 58.9 percent of their passes and have allowed 12 passing touchdowns and have just 6 interceptions as well. However, these numbers are heavily inflated due to playing the 121st, 122nd, and 123rd passing offenses (out of 125 overall) in Georgia Tech, New Mexico, and Navy, respectively. The 9th ranked passing offense, Florida St., was extraordinary against Pittsburgh with 27 of 29 completions (93.1 percent) for 377 passing yards and 4 touchdowns. Even Old Dominion, a transitional Division 1-A team this season, passed for 312 passing yards against Pittsburgh. Considering all of this, the Irish should be able to pass on Pittsburgh as well.

Pittsburgh QB’s: Tom Savage, a Rutgers and Arizona transfer, has completed 60.7 percent his passes for 1,779 yards with 14 touchdown passes and 7 interceptions. Chad Voytik has appeared in 2 games and has completed 1 of 1 passes for 8 yards. Savage has only passed for 300 yards more than once all season, with a 424 passing yard and 6 touchdown pass performance against Duke.

Pittsburgh QB’s vs. Notre Dame Pass Defense: The Irish are 23rd in passing defense and have allowed opponents to throw for 205.7 passing yards per game and for opponents to complete 60.3 percent of their passes and have allowed 14 touchdown passes and have 6 interceptions this season. Even though the Irish have played a couple of option teams lately, the pass defense has done a solid job as of late. If the Irish can defend receivers Tyler Boyd and Devin Street, then it will shut down Tom Savage’s options considerably as they have 1,334 of the teams 1,787 passing yards (roughly 75 percent of the yards overall) belong to them.

Notre Dame RB’s vs. Pittsburgh Rush Defense: The Panthers are ranked 65th in the nation in rush defense. They are allowing opponents to average 4.2 yards per rush and have allowed 13 rushing touchdowns this season. The Irish have gained momentum with the running game and Tarean Folston being able to help carry the ball on the ground is a big plus as well. Look for Notre Dame to balance the running game with the passing game as the running game continues to improve for the Irish.

Pittsburgh RB’s vs. Notre Dame Rush Defense: The Irish are 66th in rush defense and are allowing 164.9 rushing yards per game and have allowed opponents to average 4.2 yards per rush and 9 touchdowns on the ground. The Irish should be able to hold the Panthers on the ground against a rebuilding Pittsburgh running game.

Notre Dame WR’s vs. Pittsburgh DB’s: The Irish have one of the most talented receiving units that the Panthers will face this season. With many players capable of stepping up week after week, it makes it harder when it comes to determining who to defend in coverage. Quite a few players are capable of catching long passes as well, which makes things more dangerous too. If Tommy Rees can get the ball to the receivers without difficulty, then look for another strong game from the receiving unit on offense.

Pittsburgh WR’s vs. Notre Dame DB’s: The Irish have had strong play lately from the secondary, and in particular out of KeiVarae Russell. Containing Devin Street and Tyler Boyd will be most important, but others have been able to make an impact in the receiving game. If the Irish cover those two, then it will considerably limit Tom Savage’s options as only two other players exceed 100 receiving yards in total this season.

Notre Dame OL: The Irish offensive line was down two starters against Navy. Christian Lombard was out for the season, and Chris Watt was a game-time decision, but is going to be back this week for Pittsburgh. The Irish managed to do a great job in blocking on offense in terms of pass and run protection. The Irish are averaging 4.5 yards per rush and 149.6 rushing yards per game. The Irish have allowed 7 sacks this season, 39 tackles for loss, and 12 quarterback hurries in 9 games.

Pittsburgh OL: Run blocking has been below average with 122.5 yards per game and 3.6 yards per rush overall. Opponents have had no difficulty in getting into the backfield with 56 tackles for loss, 29 sacks, and 27 quarterback hurries allowed this game. Protection in the pass and run has been one of the weakest areas on offense for Pittsburgh this season and keeping their quarterbacks protected has been a challenge in the last couple of years with 38 allowed last season and 64 in 2011.

Pittsburgh OL vs. Notre Dame DL: The Irish defensive line has been hit with injuries with Kona Schwenke out for the game, Sheldon Day being out for the remainder of the Navy with injury, and Louis Nix III missing two games. The Irish should hopefully have Nix and Day ready to go against Pittsburgh. Notre Dame has 13 sacks, 47 tackles for loss, and 28 quarterback hurries this season. Younger players were able to get playing time, which helped considerably, and if they are called upon again, then the experience should help if there is increased playing time.

Notre Dame DL: The defensive line of Notre Dame has been hit harder than any position this season with injuries. Two players had season ending injuries in the pre-season, Sheldon Day has missed a few games, and Louis Nix III has missed two games. However, this has the benefit of younger players and backups being able to get valuable playing time. Stephon Tuitt has 34 tackles, 6.5 tackles for loss, 5 sacks, 1 interception (returned for touchdown), 1 pass breakup, 9 quarterback hurries, and 1 forced fumble. Stephon Tuitt is one of only two players (the other being Bennett Jackson) on Notre Dame’s defense to register some stat in all but three defensive categories, which are fumble recovery, blocked kick, and safety. Louis Nix III and Sheldon Day are expected to play considering that Nix was able to practice and Day was mentioned to be available for interviews. Louis Nix III has 22 tackles, 2 tackles for loss, and 2 pass breakups, while Sheldon Day has 15 tackles and 2 tackles for loss. Backups will be expected to contribute for a depleted defensive line.

Notre Dame DL vs. Pittsburgh OL: Considering that Pittsburgh has had quite a bit of difficulty in keeping opponents out of the backfield and have allowed many sacks, this benefits the Irish in going up against an offense line that has shown poor protection this season. The Irish will need to be able to pressure Tom Savage constantly and get into the backfield to stop the run.

Pittsburgh DL vs. Notre Dame OL: The Irish must contain Aaron Donald as much as possible. He has been successful this season in getting into the backfield of opposing teams, getting quarterback pressure, and generating turnovers even. Bryan Murphy must also be contained as well. Having Chris Watt back is a tremendous boost for the Irish as it will help with the strong left side that will need help in containing Aaron Donald and Bryan Murphy in particular.

Notre Dame LB’s: The linebacker unit was hit hard with another injury with Ben Councell being out for the season with injury. Ishaq Williams is likely out as well and Jarrett Grace is out for the season since Arizona State. Carlo Calabrese leads the Irish in tackles with 65 and has 5.5 tackles for loss, 0.5 sacks, 1 pass breakup, and 1 fumble recovery. Dan Fox has 58 tackles, 3 tackles for loss, 1 interception (returned for touchdown), and 1 fumble recovery. Jaylon Smith has been very impressive as a true freshman and helped stop Navy on 4th down to win the game. On the season, he has 42 tackles (and could finish in the top 3 in tackles overall for the team), 5.5 tackles for loss, 1 interception, 2 pass breakups, 1 fumble recovery, and 1 forced fumble. Prince Shembo has 32 tackles, 3 tackles for loss, 3 sacks, and a team-leading 12 quarterback hurries.

Notre Dame LB’s vs. Pittsburgh: With injuries mounting up front on the defensive line, the linebackers for the Irish will need to be in support for taking care of Pittsburgh. Prince Shembo will need to continue getting quarterback pressure with his team-leading quarterback hurries. Jaylon Smith will need to keep playing at the level he has been and keep improving as he has been all season. Backups also have been able to play in the last couple of weeks and they too will be counted on with injuries in the front seven.

Pittsburgh LB’s vs. Notre Dame: Pittsburgh will need account for an improving running game by the Irish that saw Tarean Folston make his place in the main rotation of Cam McDaniel and George Atkinson III. Tight end Troy Niklas is a matchup nightmare and with backup Ben Koyack becoming more involved in scoring touchdowns will make tight end coverage difficult as well and Tommy Rees has done a solid job in targeting his tight ends (Niklas and Koyack have 8 of the 22 receiving touchdowns this season) all season long.

Notre Dame DB’s: Younger players continue to see more playing time in the secondary with the notables being Cole Luke, Devin Butler and Eilar Hardy. Bennett Jackson has 48 tackles, 4 tackles for loss, 1 sack, 1 interception (returned for touchdown), 2 pass breakups, 1 quarterback hurry, and 1 forced fumble for the Irish this season. Matthias Farley has 38 tackles, 1 tackle for loss, 2 interceptions, and 2 pass breakups, while KeiVarae Russell has 36 tackles, 1.5 tackles for loss, 5 pass breakups, and 1 fumble recovery. Austin Collinsworth is questionable for Pittsburgh right now due to injury, and he has 24 tackles and 2 quarterback hurries this season. The status of Elijah Shumate is unknown for this weekend’s game, which would mean increased playing time for Eilar Hardy and Max Redfield.

Notre Dame DB’s vs. Pittsburgh WR’s: The main focus for the defensive backs is going to be covering Devin Street and Tyler Boyd. The injuries in the safety unit is going to hurt with the statuses of Austin Collinsworth and Elijah Shumate up in the air. If the Irish contain Street and Boyd, it will make things less difficult in the passing game.

Pittsburgh DB’s vs. Notre Dame WR’s: Pittsburgh has experience and that can help with covering a talented receiving unit that Notre Dame has. Tommy Rees has been great at spreading the ball lately. The Irish have been able to see younger players step up and make plays. Should Tommy Rees be successful with getting the ball to his receivers, then it will turn into a long night for the Pittsburgh secondary.

Everything Else: The Irish are coming off a close win over Navy. Injuries have mounted in the front seven for the Irish season with the worst of it occurring last weekend. Pittsburgh has had trouble lately with scoring, as they have scored more than 20 points just twice in the last 6 games (21 against Navy, 35 against transitional Division 1-A Old Dominion). Look for the Irish to continue to establish the run and balance that with the passing game. Tarean Folston will continue to see more and more time with the ground game that continues to improve for the Irish. Escaping injury-free is a major benefit after the load of injuries in the last couple of weeks, and having players back from injury will also help.