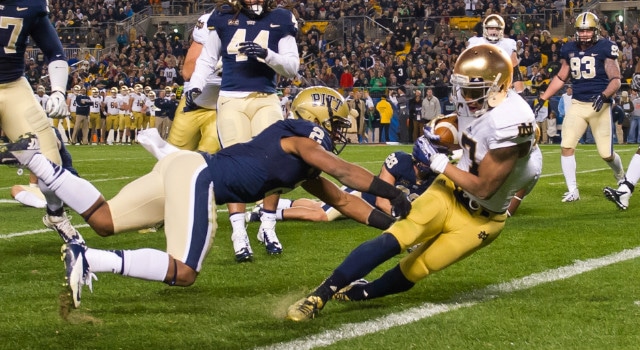 The Irish fell to 7-3 on the season after their upset loss to Pittsburgh Saturday night.  Notre Dame looked sloppy in all phases of the game, poor quarterback play, bizarre coaching decisions, and lackluster defense.  All these mistakes compounded by horrendous refereeing was too much for the Irish to overcome as they fell 28-21, meaning their BCS hopes have been dashed.  The following players played well in a losing effort for the Irish:

Another week, another strong outing for Irish captain T.J. Jones.  Jones had six receptions for 149 yards and a touchdown versus the Panthers.  Jones was able to break away from the Pitt secondary with ease having multiple huge plays.  Jones also factored into the run game with three carries for 41 yards and a touchdown.  Jones will definitely be factored into all aspects of the offensive gameplan now as he clearly needs to get as many touches as possible.

Irish tight-end Ben Koyack played perhaps his best game of the season in a losing effort.  Koyack had four receptions for 76 yards playing in his home state.  Notre Dame’s number two tight-end stepped up as Troy Niklas really struggled to get going versus the Panthers.  Koyack made himself available in the middle of the field and also blocked well in the limited Irish run game.

Freshman sensation Jaylon Smith had a big day for the Irish.  Smith had a team high 11 tackles versus the Panthers, one of which for a loss.  Smith was all over the field as usual running around and making plays.  Smith did a solid job of containing Pitt’s backs and stopping them from getting to the outside to make big plays.