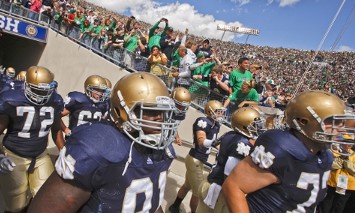 Notre Dame finished each of the last four season unranked in the Coaches’ Poll, but they will start the the 2011 ranked 18th after last season’s strong finish and raised expectations for year two under Brian Kelly.

A year ago Notre Dame started year one of the Brian Kelly era unranked and never cracked the top 25 after stumbling out of the gates.  The late season surge that saw Notre Dame end USC’s winning streak over the Irish, beat a top 25 team on Senior Day, and end the season with a bowl win, however, has expectations raised and earned the Irish the highest ranking to start the season for a team with less than 9 wins in 2010.

Based on the questions still facing the Irish – most notably at the starting quarterback position – an 18th place ranking seems pretty fair to start the season.  Some preseason publications have Notre Dame ranked considerably higher, but with the uncertainty surrounding the quarterback position, it’s hard to argue with where the coaches have the Irish placed to start the season.

If Notre Dame takes care of business on the field this season, starting 18th won’t make much of a difference either as they will move up quickly.

In looking at the rest of the top 25, only two Notre Dame opponents start the season ranked in 2011 – Michigan State (#17) and Stanford (#5).  Michigan State won’t be tested before traveling to South Bend on September 17 so their ranking should only improve before facing the Irish.

Stanford on the other hand could have a drastically different ranking before the Irish come to town over Thanksgiving weekend.  While Stanford does have Andrew Luck returning, they lost a lot of other talent from their 12-1 squad of a year ago the most important of it coming on the sidelines with the departure of Jim Harbaugh to the NFL.

Some other Irish opponents did receive some consideration without cracking the top 25 with Michigan, Pittsburgh, and South Florida all showing up in the “others receiving votes” area.