Is Notre Dame Ready for an Undefeated, Primetime Showdown? 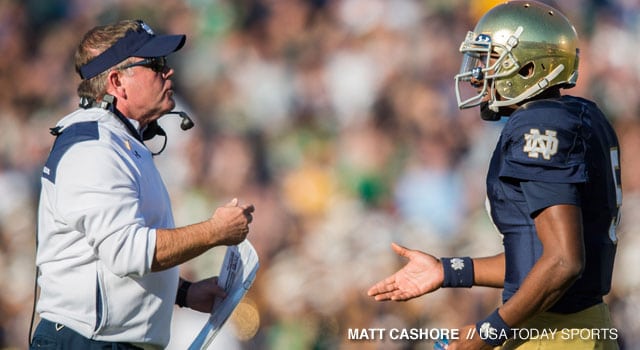 Trap games are common in college football.  It’s easy to understand why a football team like Notre Dame would struggle to get “up” for its contest against North Carolina – a team that arrived in South Bend on a three-game losing skid with double-digit margins of defeat in each contest – after a last second win over rival Stanford.  This relatively expected letdown was exacerbated by the fact Notre Dame’s matchup with North Carolina took place one week prior to an impending primetime showdown with defending national champions, Florida State.

Simply put, the Fighting Irish were able to earn a victory despite being caught peeking ahead to the Seminoles.  Not all programs are so fortunate.  No. 8 UCLA came out flat against an unranked Utah team one week after defeating No. 15 Arizona State in an early Pac-12 clash – and one week before taking on then-No. 2 Oregon – and the Bruins were unable to overcome their initial lethargy and fell to the Utes.  It was a costly mistake, and one that will largely be responsible for knocking UCLA out of playoff contention after this past Saturday’s loss to Oregon.

The notion a young team like Notre Dame would fall victim to a trap game against the Tar Heels holds plenty of merit, but may also be too far-reaching and simplistic.  The North Carolina game possibly highlighted issues that could more accurately be described as cracks in the Fighting Irish’s 2014 foundation.

“If you take away those three turnovers that I had, the score looks a little bit more relaxed,” Notre Dame quarterback Everett Golson said to the media after the North Carolina contest.  “I will do better.”

But Golson hasn’t done better.  In fact, the Irish signal caller – who has been mentioned by some outlets as a Heisman contender – has regressed in his development as the season has trudged on.  Golson has been responsible for 9 turnovers in the last three games, and the number would have been upped to 10 had Notre Dame’s starting right guard, Steve Elmer, not astutely fallen on a fumble against Syracuse.

The issue isn’t even that mistakes are being made – it’s that the same mistakes are being repeated.  Everett Golson has struggled to protect the football when running outside the pocket, and yet again a fumble was lost against North Carolina when Golson scampered up field without adequately gripping the ball.

The regression has extended to other areas, too.  Golson has looked extremely uncomfortable maintaining the pocket, and NBC analyst Mike Mayock noted in Saturday’s contest that Everett was too quick to abandon it while wide receivers were getting open.  Even when Golson did maintain the pocket he appeared hesitant, possibly gun-shy out of fear of adding to his expanding list of miscues.  This reluctance was on full display when speedy wide receiver Will Fuller blew past North Carolina’s coverage on a deep route.  Golson’s momentary hesitation turned a surefire touchdown into an incompletion, with Fuller having to transition from receiver to defender, out-jumping the North Carolina secondary in order to swat down a potential interception.

Not even Golson’s decision-making has been spared as of late.  Trailing North Carolina 7-0 after the Tar Heel defense capitalized on an Everett Golson fumble deep inside Notre Dame territory, Golson was intercepted while attempting to throw a quick out route to tight end Ben Koyack.  Koyack was blanketed the entire way by North Carolina linebacker Jeff Schoettmer, and the decision that would ultimately lead to an interception return for a touchdown would have been a poor one for a true freshman, let alone a quarterback entering the Heisman discussion.

But Notre Dame’s reoccurring offensive woes were complemented in uncharacteristic fashion by Notre Dame’s usually stellar defense, which was tested by an up-tempo offensive attack for the first time this season.

The results were not positive.

The North Carolina Tar Heels’ offense ran 86 plays against Notre Dame’s defense, the second most snaps for North Carolina all season (the Tar Heels ran 94 offensive plays in their victory against Liberty).  North Carolina’s 86 plays were an increase of 32 percent compared to the season average 65 offensive snaps the Notre Dame defense had faced prior to North Carolina, and the up-tempo pace wore down and confused the Irish defense.

Averaging only 10-points per game, Notre Dame’s defense surrendered 36 points to the Tar Heels’ offense (which excludes Golson’s interception return for a touchdown).  The defense also allowed a season high 510 yards, which was the most North Carolina had accumulated to-date.  The Tar Heels’ 184 yards rushing and 4.4 yards per carry mark were also the worst for the Fighting Irish defense so far this season (Syracuse’s 4.5 yards per carry were inflated due to one long gain on a fake punt).

The downward trajectory of Everett Golson’s production combined with Notre Dame’s defensive struggles against offensive tempo looms over the program as it heads into an undefeated heavyweight bout with Florida State.  The Seminoles boast an NCAA-leading 22-game winning streak and are averaging 39 points per game.  And while Florida State has averaged 68 offensive snaps per contest – which is on par with what Notre Dame’s defense has faced per game, excluding North Carolina – the Seminoles have the talent and athletic ability to go up-tempo, should they so desire.

Despite these concerns, it cannot be ignored that Everett Golson has a 17-1 record at Notre Dame, and his miraculous ability to find a way to win justifies his status as a clutch performer.  But if Notre Dame wants to take the next step and become an elite program, it has to beat the likes of Florida State, and such a step can only be achieved by playing error-free football.   Head coach Brian Kelly knows it, and so does Everett Golson.

Notre Dame has fought hard to once again be in the national picture, and the spotlight of Tallahassee is beckoning.  America will be watching to see if the Fighting Irish are up for the task.

Scott Janssen is a blogger for the Huffington Post and has authored several nationally-featured articles, including an appearance on MSNBC as a sports contributor.  He talks football 24-hours a day, much to the chagrin of his wife and those around him.  Scott can be reached at scottjanssenhp@gmail.com.