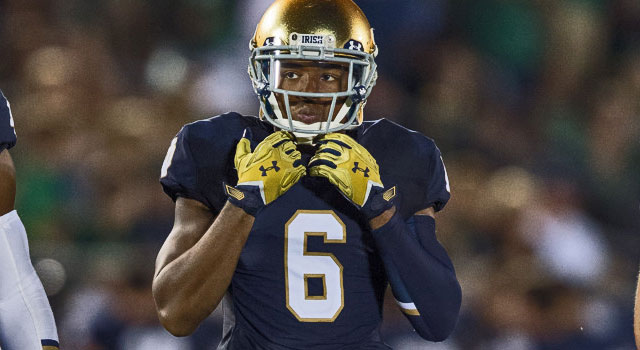 Another day, another Notre Dame player with eligibility remaining entering the 2016 NFL Draft.  Saturday it was running back CJ Prosise.  Sunday it was All-American wide receiver Will Fuller.  Monday it was cornerback Keivarae Russell joining the growing list of Notre Dame draft eligible prospects.

Thanks @NDFootball and @CoachBrianKelly for everything. I'm leaving, but grateful for my time at @NotreDame https://t.co/U5aCpOeNhM

And with that Notre Dame will be down another defensive starter in a secondary that was shaky at best at times in 2016 to begin with.  The Irish will now be replacing Russell, safety Elijah Shumate, and nickel back Matthias Farley this off-season.  Luckily for Notre Dame, they got a sneak peak at what life without Russell would be like in the season finale and in the Fiesta Bowl against Ohio State with Russell on the sidelines following his injury against Boston College.

When Notre Dame traveled to Palo Alto in November, Devin Butler started in Russell’s place.  Last week it was rising junior Nick Watkins filling in when Butler suffered a broken foot in Fiesta Bowl practices.  The results for both players were a bit mixed, but both showed at times that they have the potential to fill in just fine Russell in 2016, but at the same time both have a lot of work to do this off-season before one of them secures a starting spot.

Before diving too deep into Butler or Watkins’s chances, here’s a quick run down of all of the cornerbacks Notre Dame will be returning in 2016.

Luke is locked in as a starter we all know, but its the cornerback that starts opposite of him that will now be one of the more interesting battles to watch this off-season.  Shaun Crawford was slated to start at the nickel this year before suffering an injury in camp and figures to settle in there again in 2016.  The battle for Russell’s spot will most likely come down to Butler, Watkins, Coleman, and White.

Nick Coleman saw some playing time early in the season in a reserve role, but when Russell went down, Kelly turned to his more experienced players.  Butler first before his injury thrust Watkins into the lineup.  In Butler’s lone start, he made a couple nice plays early, but his performance against the Cardinal was marred by a missed tackle on a 3rd and goal that resulted in an easy Stanford touchdown.  Watkins meanwhile had a few struggles early, but settling in breaking up a pass in the end-zone in the second half.  Watkins was victimized for a first quarter touchdown and nearly another in the fourth but was bailed out by a dropped pass.

Neither Butler or Watkins wowed enough to be considered the leader in the clubhouse heading into the off-season although to Watkins’s credit, he was tasked with facing a much more dynamic set of receivers against the Buckeyes than Butler faced against the Cardinal.  With neither really establishing themselves in their brief action, the door should be open for  rising sophomores Coleman who has already cut his teeth in game action and White who “redshirted” this past season.

Notre Dame is also set to sign a trio of corners (perhaps more if Jalen Elliot ends up playing corner or if the Irish were to add another before National Signing Day), but it’s tough to imagine any of them coming in and locking down that open starting spot without a ridiculous showing in fall camp since none are early enrollees.

Losing a player the caliber of Keivarae Russell is never fun – especially since he was just starting to play to his old form in the second half before his injury robbed the Irish of his services for two of its toughest games of the season.  That said, the Notre Dame staff has done a heck of a job recruiting the cornerback position over the last three recruiting classes and because of that, the Irish have a lot of depth at the position and should be in solid shape at the position in 2016.

As for Russell, it’s tough to say where he will be drafted.  His early season struggles and late season injury will likely result in a bit of slide for him.  His tape which will show his two game clinching interceptions and the ridiculous measureables that he will turn in at the combine however will ensure his name is called.  As of now though, CBS Sports has Russell ranked as the #95 overall prospect and has placed a 3rd round grade on him.