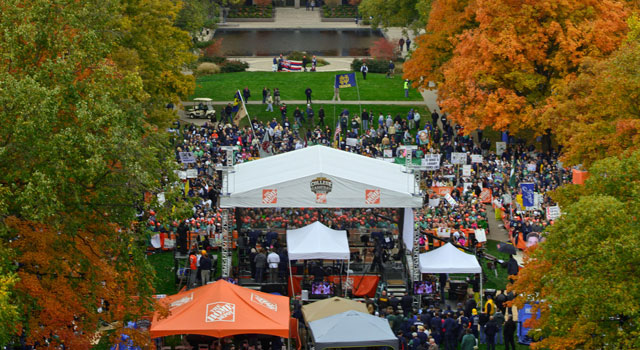 The first road show for ESPN’s now flagship college football program “Gameday” was the campus of the University of Notre Dame for the 1993 epic showdown between #1 Florida State and #2 Notre Dame.  As we all know the Irish won that first ESPN appearance.  Since then, however, history hasn’t been on Notre Dame’s side when ESPN travels to the site of an Irish showdown.

Before diving any deeper, here’s a full run down of Notre Dame previous 26 appearances on ESPN College Gameday during which the Irish have compiled a record of just 11-15.

Prior to the current four game skid, Notre Dame had a program best three game Gameday win streak – all of which came in 2012 (Stanford, Oklahoma, and USC).

Notre Dame has had one other four game losing streak in front of the ESPN cameras starting with Michigan in 1999 and including Tennessee (1999) and then back to back loses to Nebraska in 2000 and 2001.  Notre Dame has never lost five Gameday appearances in a row.

Notre Dame on the Road

Notre Dame is just 7-11 on the road when Gameday travels with the Irish.  The last road win for the Irish in front of the ESPN crew came in 2012 when they capped off their undefeated regular season in 2012 to clinch a berth in the BCS National Championship game – the same game that started Notre Dame’s current four game Gameday losing streak.

Los Angeles and Ann Arbor are really the main sources of Notre Dame’s Gameday road woes though.  Outside of those two sites, Notre Dame is 6-4.  When facing the Trojans and Wolverines, though, the Irish are 1-7 when Gameday is around (1-3 against USC and 0-4 against Michigan).

Notre Dame has only played one game in the state of Pennsylvania with Gameday on hand prior to this weekend.  That was in 2005 for the first game of the Charlie Weis Era when the Irish came out like a house on fire and blew out #23 Pitt 42-21 after coming into the game unranked.

Against Teams Outside the Top 10

Of Notre Dame’s 26 appearances on ESPN College Gameday, they have faced teams outside of the top 10 just 10 of those times.  In those games, Notre Dame is 7-3 but has lost its last two such contests the most recent of which was Clemson earlier this year.  Before that, the only other times Notre Dame lost to a team outside the top 10 on Gameday was to Michigan in both 2011 and 2013.

If there’s anything that we’ve learned by now, it’s that hopefully Gameday is no where near Ann Arbor or South Bend if Notre Dame and Michigan ever renew their rivalry.

Brian Kelly and Bob Davie are the only Notre Dame coaches to have a losing record when their teams appear on Gameday.  Kelly’s squads are 3-5 in his six seasons in command of the Irish though he did start off his career with a 3-1 record before the current four game losing streak.  Davie was 1-4.

The only Notre Dame coach with a winning record on Gameday?  Amazingly it is Tyrone Willingham with a 3-2 record.  Lou Holtz (2-2) and Charlie Weis (2-2) were both .500 in front of the folks from Bristol.

Lee Corso has been a mainstay on ESPN’s College Gameday since the first road show in South Bend over twenty years ago.  Along the way he his schtick has been to wear the headgear of the team he picks to win the game and for Notre Dame’s sake, let’s all hope he picks Temple this weekend.  When Corso picks Notre Dame the Irish are just 2-5.  Corso most recently picked Notre Dame to beat Clemson earlier this season.